Mubarak Raza Kazmi, a Shia lawyer was on his way to house from office when Yazidi takfiri nasbi terrorists of outlawed Sipah-e-Sahaba made him target in Gulshan-e-Iqbal Block 13-D. He was martyred on the spot.

Reports had it that he was son-in-law of renowned Shia speaker Allama Talib Johari. Body was first taken to Jinnah Hospital for postmortem and then shifted to Imam Bargah Shohda-e-Karbala.

. Shiite News Correspondent reported that Wednesday was another deadly day during the holy month of Ramazan.

Shia parties and leaders have condemned the targeted murder of Shia lawyer in Karachi. They demanded arrest of the killers. 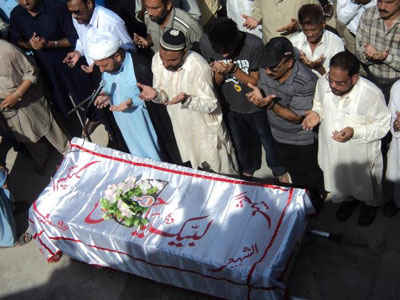 Martyr judge laid to rest in Wadi-e-Hussain (AS) graveyard

Minister accuses ‘the powers that be’ for terrorism in Pakistan