Counter-Terrorism Department (CTD) Khyber Pakhtunkhwa arrested 567 militants during 876 targeted operations that it conducted in various parts of the province in last ten 10 months, a summary report issued by the department said Wednesday.

The report, a copy of which is available with Dawn.com, reveals that the CTD either arrested or killed at least 93 proclaimed offenders (POs) carrying head-money and wanted in high-profile cases. CTD sources told DawnNews 10 of the 93 POs were killed by the CTD personnel.

The CTD report revealed that they have arrested the terrorists and masterminds involved in the Hayatabad Mosque/ImamBargah suicide attack in Peshawar during Friday prayers which claimed lives of 21 Shia-worshipers held on February 2015 and suicide attack case of Shaheed Allama Arif Hussaini Al-Hussaini mosque at Chamkani Peshawar in June 2013 where 13 worshipers martyred in the incident.

The CTD personnel traced 252 militancy-related cases during the time period, said the report.

Suspects wanted in the following high-profile cases were arrested by the CTD, documents show:

Bomb blast in pick-up near PS Badhber area of Peshawar

Suicide attack on imambargah in Chamkani near Peshawar

Attack on a PIA flight in Peshawar

Peshawar, the capital of Khyber Pakhtunkhwa, lies on the edge of Pakistan’s tribal areas which have been labelled by Washington as the main sanctuary for Al Qaeda and Taliban militants in the country.

The city has seen frequent attacks by militants in the past few years, with targets ranging from civilians to policemen and other law enforcement personnel 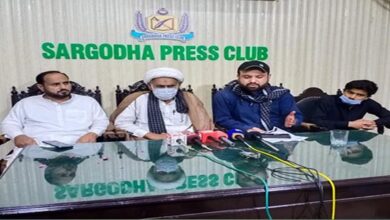 Imamia Students demand immediate release of Sardar Tanveer and others