Tens of Syrian kids have died as a result of worsening situation in al-Hawl Camp run by the US-backed Syrian Democratic Forces (SDF), local sources said.

“At least 117 children under the age of 12 have lost their lives due to the lack of facilities and hygiene in al-Hawl Camp,” battlefield sources said.

The Syrian Observatory of Human Rights (SOHR), meantime, reported that 60 percent of the children killed in al-Hawl Camp have lost their lives over the past 19 days.

It noted that there are 63,500 refugees sheltered in al-Hawl Camp.

This comes as a new wave of popular protests has intensified over the lack of facilities in the camp.

In a relevant development earlier this month, the media activists reported that tens of refugees had died of shortages in a camp controlled by the SDF in Hasaka province.

Media activists reported that only in one day, 7 children and 2 women had died due to lack of medical and treatment possibilities in al-Hawl refugee camp in Hasaka.

They added that nearly 14,000 families, consisting of 47,000 people, are living in the camp under an acute shortage of food, drugs and hygiene aids, warning that the children are in critical conditions.

The World Health Organization (WHO) announced in early March that 73 Syrian refugees have died in al-Hawl camp in the past few months, adding that two third of them are children.

At least 29 children and newborns are reported to have died over the past eight weeks, mainly from hypothermia, while travelling to the camp or shortly after arrival, the WHO said in a statement early February.

It said about 23,000 people, mainly women and children fleeing hostilities in rural areas of neighboring Deir Ezzur, had reached the camp over that period.

Field sources from Hasaka province reported that the rallies were held to protest at SDF’s incapability to supply the needs of the displaced community sheltered in the camp.

The camp population is suffering lack of basic needs and commodities, hygiene and cold which have led to the death of at least 36 children so far, the locals said. 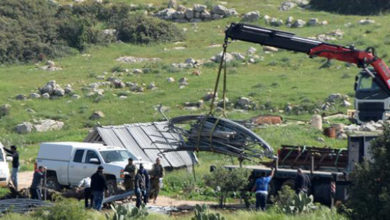 Over 300 Kurd fighters enter Syria from Turkey to fight ISIL