Israel has reportedly sent strongly-worded messages to Lebanon, delivered through France, warning the Arab country of the consequences of the precision missiles possessed by the Hezbollah resistance movement.

According to Israeli media, the issue was discussed at length during a Wednesday meeting between the regime’s President Reuven Rivlin and his French counterpart Emmanuel Macron in Paris.
The talks, also attended by Israeli air force commander Amikam Norkin, were held ahead of Macron’s planned visit to Beirut.
In a move coordinated with Prime Minister Benjamin Netanyahu, Rivlin has reportedly stressed Tel Aviv’s concern over Hezbollah’s “large rocket and missile arsenal”, and what Israel calls “efforts made by Iran and Hezbollah to improve the precision of the missiles the Lebanese organization holds.”
He has also expressed the regime’s worry about the tunnels Israel says Hezbollah has dug near the occupied territories.
Back in September, Hezbollah’s chief warned Israel of a fate it “has never expected” if it chooses to wage a new war on Lebanon, reminding the regime that the Lebanese resistance movement was in possession of precision rockets.
In a speech on Sep. 20, 2018, Seyyed Hassan Nasrallah said the Tel Aviv regime had failed in all its attempts to prevent Lebanon’s Hezbollah from achieving precision rockets.
“No matter what you do to cut the route, the matter is over and the resistance possesses precision and non-precision rockets and weapons capabilities,” he said.
“All your attempts to prevent Hezbollah from possessing accurate missiles are foiled,” he added.
A few days later, in a speech at the UN General Assembly, Netanyahu showed photographs of three sites in which he claimed there was an attempt to build “precision-improving plants” for rockets, close to Beirut’s international airport.
Tel Aviv claims the Hezbollah withdrew from those sites a few days after Netanyahu’s speech; however, the Israelis say the factories might have been relocated to other sites in Lebanon.
Hezbollah was formed following the Israeli regime’s invasion of Lebanon and the ensuing occupation of its southern parts in the 1980s, and currently constitutes Lebanon’s de facto military power.
Since then, the movement has helped the national army retake the occupied regions from Tel Aviv and thwart two Israeli acts of aggression in 2000 and 2006.
The movement has also been playing a significant role in the Syrian army’s fight against Takfiri terrorist groups, including Daesh and al-Nusra Front, thus preventing the spillover of the war into Lebanon.
Since the end of the 2006 war, Israeli forces have regularly violated Lebanon’s sovereignty, with the regime’s officials even threatening another offensive against the Arab country. 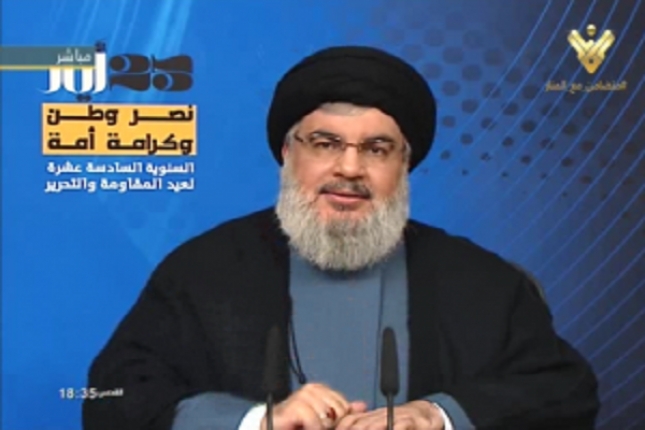 S. Nasrallah: Axis of Resistance to Triumph, Palestine Banner to Be Raised again

Hezbollah Discusses with Patriarch Rai Risks of His Visit to Jerusalem