Hezbollah Secretary General Sayyed Hasan Nasrallah is to speak on Monday afternoon, tackling the results of the general parliamentary elections which took place on Sunday.

Sayyed Nasrallah is to address the Lebanese at 5:00 p.m. via Al-Manar, Hezbollah sources announced late after midnight on Sunday.

Lebanon witnessed on Sunday nationwide elections, with Hezbollah, Amal movement and allies securing an important number of seats in the parliament.

“Had It Not Been for Hezbollah’s Syria Fight, ISIL Would Have Reached Beirut” 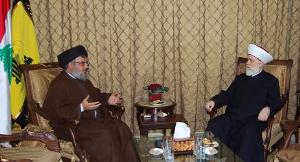