Hezbollah marked the tenth anniversary of the Resistance and Liberation Day Tuesday at the Sayyed Al-Shouhada compound in Beirutâ€™s southern suburb. Official, religious, military, and popular figures attended the ceremony in which Hezbollah Secretary General Sayyed Hasan Nasrallah delivered a speech for the occasion and tackled recent developments in Lebanon and the region.

The Hezbollah chief set a new formula that will be adopted in any new war with Israel saying that Hezbollah will attack Israel-bound ships if the Zionist entity imposed a sea blockade on Lebanon. “When the world will witness how these ships will be destroyed in Palestine’s regional water nobody will dare to go there just as they will block (others) from coming to our coasts,” his eminence told thousands of supporters.

Sayyed Nasrallah’s comments came amid a five-day drill in Israel- dubbed “Turning Point 4”- which was launched on Sunday to test the home front  preparedness against possible missile strikes in any future war.

At the beginning of his speech, Sayyed Nasrallah paid tribute to the martyrs â€œwho sacrificed their lives to realize this victory, namely Sayyed Abbas Mousawi, Sheikh Ragheb Harb, and Hajj Imad Moghniyeh.â€  His eminence also thanked south Lebanon residents â€œwho took part in municipal elections despite of the simultaneous Israeli maneuvers.â€ Iwould like to thank all the Lebanese who fulfilled the three-of-four phases of the elections and I ask Almighty Allah that the fourth round due Sunday in the north would smoothly,â€ his eminence said.

THEY SAW WITH THEIR OWN EYES WHAT THEY USED TO RIDICULE

The Hezbollah chief divided his discourse into three parts: â€œThe conflict with the enemy, the future, and position and formula which I am committed to and which will be added to the many formulae of confrontation with the enemy.â€

Sayyed Nsrallah recalled that the 1982 Israeli invasion of Lebanon was part of a broader US-Israeli scheme. â€œIn 2000, this scheme was thwarted. However they always have other schemes and they will go on plotting until they fall.â€

He said that one of the plots was to build Israeli settlements in south Lebanon, â€œbut thanks to the martyrs and particularly the self sacrifice martyrs, this never materialized. We all remember how the first year of the occupation was rife with Jihadi operations against the occupation in several regions and by more than one party and movement.â€

The S.G. also reminded how some sides in Lebanon and the Arab world used to ridicule Hezbollah as of 1982 when its leaders spoke about the victory to come. â€œWhen Sayyed Moussawi said in 1991 that Israel has fallen and that it will move out of Lebanon humiliated, some used to mock at him. But the year 2000 came and the resounding victory came along, and now I ask all the Lebanese and the entire world: Who would have thought that Israel would withdraw from Lebanon humiliated? What was mocked by many has happened for real and all of you saw it.â€

Sayyed Nasrallah said that some Arabs had been colluding against Lebanon before the 2000 pullout. â€œMay 26 is another day and another different shape of the region. The Zionists realized this and Arab leaders as well. Israel revealed that some Arab official sides contacted Israeli counterparts to urge the Zionist entity not to withdraw with conditions. This is not strange because we know that in 2006, some Arabs contacted Israel and urged them not to stop the war so that Hezbollah and Lebanon would not come out victorious.â€

The Secretary General stressed that the formula that yielded victory was â€œthe army, the people, and the resistance.â€ He said that Israelâ€™s home front that used to be safe in most of the post wars, was no longer safe. â€œThis era has ended,â€ his eminence stressed. â€œToday the Israelis, through their maneuvers, are trying to pacify their home front by trying to convince the people that they are strong and ready for any new war. Other argue and criticize the drills saying: Letâ€™s see what the maneuvers will result in when rocket shower all of occupied Palestine.â€

Sayyed Nasrallah explained that the Scud Missile transfer, â€œwhich I donâ€™t deny or confirm,â€ was raised so the US Congress pays Israel $250 million for their â€˜Iron Domeâ€™ which is yet to be proven feasible. Others believe that the Israelis are afraid to wage war and they are concerned about its outcome. This is why the Israeli rhetoric reflects a tendency to calm things down in the north.â€

â€œIsrael used to wage wars knowing that its home front was safe. This has ended in the wake of the 2006 war. We have our home front and they have theirs. They bomb us, we bomb them. They kill us, we kill them. This is their strategic weakness today,â€ his eminence said.

EVEN CLINTON WARNED ISRAEL ABOUT ITS FUTURE

As for â€œthe futureâ€, Sayyed Nasrallahâ€™s second point, the Hezbollah chief cited US Secretary of State Hillary Clintonâ€™s speech at the AIPAC conference to address the Israelis on the one hand, and some Lebanese journalists who are still questioning the feasibility of the resistance facing Israel.

â€œClinton said: In the face of these unforgiving dynamics of demography, ideology, and technology, it becomes impossible to entrust our hopes for Israel’s future in today’s status quo. These challenges cannot be ignored or wished away. Only by choosing a new path can Israel make the progress it deserves to ensure that their children are able to see a future of peace, and only by having a partner willing to participate with them will the Palestinians be able to see the same future. We cannot be blind to the political implications of continued conflict. There is today truly a struggle, maybe for the first time, between those in the region who accept peace and coexistence with Israel and those who reject it and seek only continued violence. The status quo strengthens the rejectionists who claim peace is impossible, and it weakens those who would accept coexistence. That does not serve Israel’s interests or our own. Those willing to negotiate need to be able to show results for their efforts,â€ Sayyed Nasrallah read.

His eminence continued to quote Clinton as she spoke about technology. â€œShe finally says: we must recognize that the ever-evolving technology of war is making it harder to guarantee Israel’s security. For six decades, Israelis have guarded their borders vigilantly. But advances in rocket technology mean that Israeli families are now at risk far from those borders.â€ Sayyed Nasrallah elaborated by saying that manufacturing and acquiring missiles was not a complex process as it used to be. â€œIt is not even costly; however it requires a political decision. Their patriots and their Iron Dome will not be effective against our missiles. The technological development today makes every town and every settlement within the Zionist entity under threat; this is what the Israelis cannot tolerate. Clinton was trying to puch the Israelis into striking a deal or a settlement. I believe that their arrogance and racism will push them into the abyss. Therefore, to those who claim they are intellectuals I tell them: that was Clinton, the US Secretary of State speaking. Those were the Americans telling the Israelis that if you donâ€™t help us to make a settlement, a Jewish state will never exist in the future and you will never find anyone to strike a deal with you. We believe in the future that Clinton was preaching about.â€

Sayyed Nasrallah assessed the current situation based on the May, 2000 withdrawal.

â€œWe are committed to the following position: After trusting in Allah, we have to be convinced that we are protecting our country with the will of our people and our national determination. The Lebanese government is making all necessary contacts to push away any danger Lebanon might be under. This is good and we agree with this, however, we should not bargain on this. The real bargain is on our national capability to defend and confront in the battlefield.â€

The Hezbollah Secretary General concluded his discourse with the new equation that the resistance will be committed to. â€œWe will tell the Israelis to be afraid of us. If the war, which we do not want, yet we are not scared of broke out, it will change the face of this region â€“ and Clinton agrees with me. We previously said that the Israeli home front has become exposed and vulnerable and we know everything about it, therefore we know where to strike. In 2006, and even before this date, there were times when the Israelis besiege our shores. Israeli vessels used to deploy in Lebanese waters and besiege our shore; so today we add the sea to the terrain. I am not announcing that we possess a new weapon, but in 2006 we destroyed the Saar 5 vessel. What I am saying is that if you besiege our shore and our ports in any coming war, all of your military and commercial ships heading to Palestine will be under the fire of the Islamic Resistance across the Mediterranean. We are talking about the Mediterranean but we have not mentioned the Red Sea yet. We are determined to enter this new domain God willing. No one will dare sail to any port in occupied Palestine. However, if a ship with Israelis on board was leaving occupied Palestine, we might let it pass. They military power used to scare others, but not today because our hearts are as solid as a rock. Let us flip the picture around. Let us make Israel afraid and then seek for someone to reassure it. For those who are still calling for disarming the resistance I tell them that this rhetoric is behind our backs because it is useless. We shall confront the next war, we shall win and we shall change the face of this region,â€ Sayyed Nasrallah concluded.

Algeria Dissociates Itself from Decision of Blacklisting Hezbollah

Lebanon to launch operation against militants on Syrian border: Premier 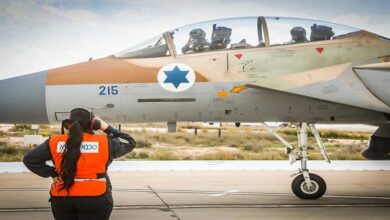 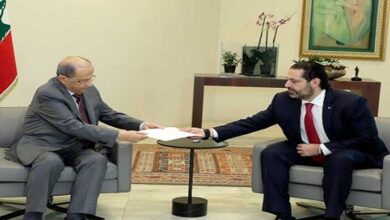