The vice-president of the Executive Council of Hezbollah said that the recently-held referendum on the separation of the Kurdistan Region from Iraq was an attempt to save Daesh from destruction.

Speaking at a ceremony commemorating one of the martyrs of Hezbollah at the Imam al-Ridha Complex in the Beirut suburb of Dahieh, Hujjat al-Islam Ali al-Da’moush, the vice-president of the Executive Council of Hezbollah said, “Lebanon has blessed by the blood of the martyrs, the achievements of the Islamic Resistance and the operations of the military and the security forces against the Takfiri terrorists and has become one of the safest and most stable countries in the region.”

The Lebanese cleric added that the forces of the Islamic Resistance, even when fighting in Syria, support Lebanon in order to prevent the terrorists from returning to Lebanon and spreading this phenomenon in the country.

Hujjat al-Islam al-Da’moush said that after their defeats in the region, especially in Lebanon, terrorist groups are trying to compensate for these failures and are therefore seeking to carry out terrorist operations against the citizens and added, “This issue necessitates increasing the security and preventing terrorist operations throughout Lebanon.”

He continued, “All American, Zionist and Arab attacks against the Islamic Resistance and the threats against Lebanon are the realization of political and media sanctions aimed at besieging and harming the image, position and achievements of the country and are the result of the failure of their projects in the region and successive defeats in Syria, Iraq and Lebanon.”

His Eminence said that the victories achieved have aroused the anger of the United States and the Zionist regime and their allies and emphasized, “Those individuals who were hoping to dominate the region in order to achieve the sovereignty of the United States, Israel and Saudi Arabia were now shouting and threatening and once again, they are talking about financial sanctions against Hezbollah.”

Hujjat al-Islam al-Da’moush said, “With the referendum on the separation of the Kurdistan Region from Iraq, the United States and the Zionist regime are seeking to save Daesh in Syria and provide services so that they will not be defeated by the Syrian army and the Islamic Resistance and they will be able to continue to prance around in the region.”

The senior Hezbollah office emphasized that the attempts to save Daesh are in vain and continued, “Internal and external threats and conspiracies against the Islamic Resistance are useless and there will be no change in our positions and values and even internal and external equations will not occur. We and the Lebanese people are not afraid of threats, sanctions and conspiracies and past experiences emphasize this issue.”

Hizbullah Denies Having Prisoners in Syria 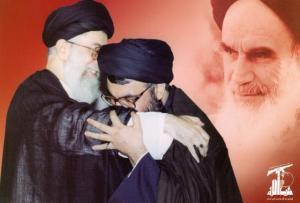