Lebanese President Michel Aoun has demanded that the Israeli regime stop all exploration in an offshore gas field on its southern border with occupied Palestinian territories.

Last October, Lebanon and Israel, which are still technically at war, participated in indirect talks mediated by the United States, to discuss demarcation to clear the way for offshore oil and gas exploration. The talks, however, failed to settle the issue.

The maritime row is over an area in the Mediterranean Sea spanning about 860 square kilometers, including a zone which is rich in oil and gas.

“Lebanon is within its rights to evolve its position,” Aoun told visiting American envoy David Hale on Thursday, asking for “international experts” to weigh in on the Israeli encroachment.

Beirut says a larger area of the Mediterranean Sea belongs to Lebanon, including part of the Karish gas field, where the Israeli regime has already given a Greek firm the rights for exploration.

The Lebanese president called for a “commitment to not carrying out any oil or gas activities and not starting any exploration in the Karish field and its adjacent waters”, according to a statement released by the presidency.

Last June, Aoun warned Israel over its “extremely dangerous” bid to explore oil and gas on Lebanon’s maritime territories, stressing that the Arab country would not allow any violation of its territorial waters.

His warning at the time came a day after Tel Aviv approved a license for oil and gas exploration in “Block 72,” located close to the Block 9 gas fields, where Beirut was set to begin explorations for natural gas and oil.

“Block 72” sits along the disputed 860-kilometer line of waters that separate the Lebanese from Palestinian territories occupied by Israel.

Israel relies heavily on gas and has long been developing a number of occupied offshore gas deposits in the Mediterranean Sea.

In the past, Israel had reportedly been avoiding granting licenses for the exploration of Block 72, fearing it could lead to a new conflict with Lebanon.

In both conflicts, contributions by the Hezbollah resistance movement proved an indispensable asset, forcing the Israeli military into a retreat.

Israel has had Lebanon’s Shebaa Farms under occupation since 1967. 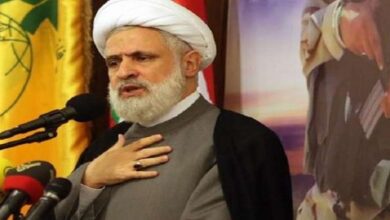 Cleric Omar Bakri ‘on the run’ in Lebanon