Lebanese Interior Minister Mohammed Fahmi on Friday said authorities possess 0certain and confirmed information that foreign interference and financial support are behind the acts of vandalization.”

In an interview with Al-Manar TV, Fahmi said: “The corruption of those carrying out the rioting has spared us a major disaster.”

“They did not spend all the sums of money that they received from the plotters to spark security incidents,” the minister explained.

Revealing that he had tasked security agencies to communicate with Hezbollah, Amal Movement, al-Mustaqbal Movement, and Lebanese Forces during the recent sectarian unrest, Fahmi said the four parties ‘were positive as to the immunization of civil peace’.

Fahmi also warned that the incidents that are happening in Syria’s Idlib might lead to a new Syrian exodus towards Lebanon, with the possibility of the infiltration ISIS members among them with the aim of sparking incidents in the country.

Reassuring that security is under control, the minister acknowledged that the economic and social situation is a ticking bomb.

“Attacks on citizens and public and private property are prohibited,” Fahmi said, adding that security forces will prevent the blocking of roads by protesters. 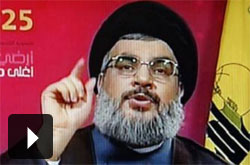 US administration shows its savage image by blocking Aids to Flood-Hit Iran: Hezbollah