A senior official of the Lebanese Hezbollah resistance movement says the United States and the Israeli regime are the main beneficiaries of the anti-government protests in his country, warning that Lebanon is on the brink of financial collapse.

“The (Lebanese) government must be formed in order to avoid such a collapse. There are parties that are working to harm Lebanon, especially the United States of America and State Secretary Mike Pompeo, who would not like to see Hezbollah as part of the Lebanese government or even in the country’s political arena,” Hezbollah Deputy Secretary General Sheikh Naim Qassem said in an exclusive interview with BBC Arabic radio station.

He added that “Hezbollah is part of this people (Lebanese nation),” calling on Washington to put an end to its interference in Lebanon’s domestic affairs.

Sheikh Qassem stressed that Hezbollah does not pay heed to the attitudes of the US and Britain, as his movement only focuses on how the Lebanese view the resistance movement.

“For our people, Hezbollah means a resistance movement that liberated their land, and represents people who are working to serve the interests of the nation and build the future of people. America, Britain and the occupying, aggressive and criminal Israeli regime have taken politically-motivated positions against Hezbollah and put the movement on terror lists. This does not mean that they are right,” the senior Hezbollah official pointed out.

Sheikh Qassem then described the US and Britain as the root cause of terrorism worldwide, stating that they have no respect whatsoever for the interests of peoples.

He went on to say that the ongoing crisis in Lebanon best serves the interests of Washington and Tel Aviv, emphasizing that they are behind any act of sedition in the country as Lebanese people do not want any internal strife at all.

Protests began on October 17, when the government proposed imposing a tax on Whatsapp calls, along with other austerity measures.

Amid the protests, Sa’ad al-Hariri resigned as prime minister on October 29.

Under the constitution, Hariri’s cabinet would stay on in a caretaker capacity until a new government is formed.

Hariri told reporters on Tuesday that he backed Lebanese businessman Samir al-Khatib to head the next cabinet, adding, however, that “some details” still had to be hashed out.

Protesters in Lebanon have stopped blocking roads and setting up barricades, and instead shifted to holding sit-ins at state-affiliated sites.

They say they will maintain pressure on the political establishment until their demands for the departure of the ruling elite and an end to chronic economic mismanagement and corruption are met.

Growth in Lebanon has plummeted in the wake of endless political deadlocks and an economic crisis in recent years.

Unemployment stands at more than 20 percent, according to official figures.

The Lebanese Finance Ministry says the national debt is hovering around $85 billion, which accounts for more than 150 percent of Gross Domestic Product (GDP).

Successive governments have failed to address a waste management crisis or improve the electricity grid, which is plagued by daily power cuts. 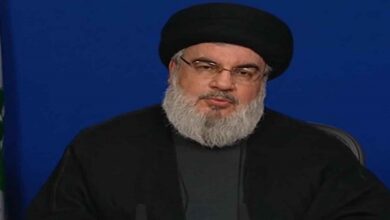 Sayyed Nasrallah to Macron: You’re Welcome as a Friend, Not as a Guardian