Lebanese Army confronted attempts by bandits to cut off roads in several areas across Lebanon.

Meanwhile at the Coal intersection in the capital Beirut, bandits placed waste containers, obstacles and stones in the middle of the road, preventing people from passing. The Lebanese Army then deployed in the area and removed all the obstacles from the road, local media reported. Similar attempt by bandits took place at the neighboring Kaskas area, but was confronted by the Lebanese Army.

Later on Tuesday, National News Agency reported Tripoli witnessed attempts to block roads and prevent buses of students and employees heading to school and work from reaching their destinations.

“Protestors placed waste containers, obstacles and stones in the middle of some sub-arterial roads, but the army immediately opened all lanes,” the NNA reported.

Thousands of demonstrators took to streets on October 17 (2019) in protest against imposing new taxes, hard livelihood conditions and corruption.

However, the demonstrations which had livelihood demands at first turned out to become suspicious as demonstrators in several protests venues chanted anti-resistance slogans and called for disarming Hezbollah.

At the start of the protests, Hezbollah Secretary General voiced solidarity with demonstrators stressing on need to make reforms in the country. However, his eminence warned the protesters against hijacking their rightful demands by several sides in and outside Lebanon.

Week later (on Friday, October 25), Sayyed Nasrallah called on resistance supporters to leave streets, citing information that the popular demonstrations have been exploited by suspicious local and foreign sides in a bid to target the resistance.

PM Saad Hariri offered his resignation on October 29, opening the door in front of the inisterial vacuum which Sayyed Nasrallah had warned against.

Moreover, the protests turn out to harm citizens with dozens of bandits who belong to anti-resistance political parties cutting off vital roads and hindering all aspects of normal life in the country. 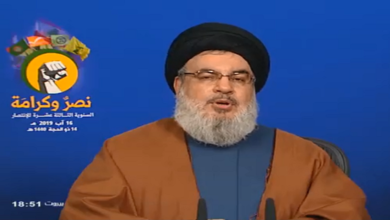