A wave of attacks in Iraq, mostly targeting security forces and Shia Muslims, has left at least 39 maartyred and dozens more injured, according to Iraqi security and hospital sources.

All of the deadly incidents occurred on Thursday.

In the town of Muqdadiya, 80 kilometers (50 miles) northeast of the capital Baghdad, a car bomb exploded at a funeral tent where family members of a Shia Muslim were receiving condolences. And as survivors gathered to evacuate the injured, another bomber detonated explosives tied to his body. The bombings killed 11 people and injured 22 more.

No group has claimed responsibility for the Muqdadiya attacks, but officials say the main suspects are militants linked to al-Qaeda.

On the road between Haditha and Baiji, northwest of Baghdad, unidentified gunmen opened fire on security personnel charged with protecting the country’s vital oil infrastructure, killing 11 of them and injuring several others. Three other members of the security forces were also killed in the attack.

In Khaldiya, a town in Anbar province, gunmen and bombers killed four policemen and inured eight. One of the attackers was also shot dead by the police.

In other attacks on security forces, militants fired three mortars at the police directorate in Fallujah, also in Anbar province, and a bomber detonated his explosives among the policemen, leaving one police officer dead and three more wounded.

A car bomber killed one policeman and two civilians and wounded nine others in south-central Baghdad.

In the northern city of Mosul, gunmen shot dead a soldier in front of his home, and a roadside bomb killed a police officer and wounded another policeman.

One civilian was gunned down in the south of Mosul, while another man was shot dead in the Sharqat area, northwest of Baghdad.

Moreover, a car bomb wounded 32 people in the northern town of Tuz Khurmatu, while two other car bombs in northwest of the city of Kirkuk injured 14 people.

The incidents are the latest in a string of attacks across Iraq that have left more than 2,500 people dead since the beginning of April. 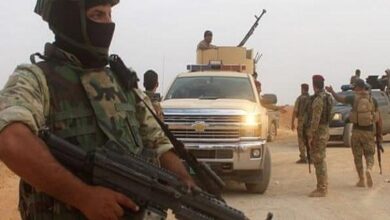