Iraqis look at the wreckage of a destroyed car at the site of a car bombing in Baghdad
An al-Qaeda group linked to Saudi Arabiaâ€™s intelligence services has dispatched 600 of its members to the southern Iraqi city of Basra to carry out terrorist attacks, Press TV reports.

The terrorists have been given orders to blow up oil pipelines, launch attacks on oil refineries, and incite ethnic violence in the city, according to the report.

The report also said that some of the terrorists had fake identification cards allegedly issued by Al-Salam University of Medina, Saudi Arabia.

The men reportedly received their training in the Syria-Iraq border region and are planning to attack religious sites in the Iraqi cities of Samarra, Baghdad, Karbala, and Najaf.

The Iraqi government says Saudi Arabia, Qatar, and Turkey are spearheading a campaign to incite violence and ethnic strife in the country.

The terrorists, who had been active in the Middle Euphrates region, were reportedly ordered to carry out armed operations in several cities across Iraq.

Violence has increased in Iraq since December 2011, when an arrest warrant was issued for al-Hashemi, who has been charged with running a death squad targeting Iraqi officials and Shia Muslims.

In response, the Iraqi government stepped up efforts to increase security across the country. 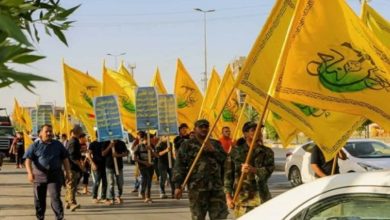 Resistance groups are the identity of Iraq: Al-Nujaba