Iraqi Prime Minister Nouri al-Maliki affirmed on Wednesday that his country rejects the foreign military intervention in Syria, calling on foreign players to be “more rational” regarding the Syrian issue. “If the world didn’t agree on supporting a political solution to the crisis in Syria through dialogue, then I wouldn’t see a light at the end of the tunnel,” al-Maliki said. In parallel, al-Maliki warned against the outbreak of sectarian wars in the region in case the opposition which fights against the Syrian government achieves victory. “In case the opposition wins, there will be a civil war in Lebanon, divisions in Jordan and a sectarian war in Iraq.. this will create a new haven for al-Qaeda which will destabilize the region.” he added. The Iraqi top official further called on outside countries to “be more reasonable regarding Syria.” On the internal front, al-Maliki reiterated that outside influences – an apparent allusion Turkey and the Gulf states – are helping to fuel Iraq’s unrest. “What is going on in Iraq is connected to what is happening in the region. It is also connected to the results of the so-called the Arab Spring and some sectarian policies in the region,” he said. However, al-Maliki stated that his government’s “patience will continue because we believe that there are people in these provinces that are patriotic and they reject sectarianism, believe in the unity of the country and denounce the voices uttering sectarian words.” For his part, Iraqi Transport Minister , Hadi al-Amiri, stressed that Turkey and Qatar have blocked all the efforts seeking a peaceful solution to the crisis in Syria.”Ankara and Doha are supporting the armed opposition and arming terrorist groups in Syria, including Jabhat al-Nusra that is linked to al-Qaeda in Iraq,” al-Amiri told Reuters. He considered Turkey’s open supply with money and arms to al-Qaeda in Syria as “a declaration of armed action against Iraq” because these arms will certainly reach the Iraqis’ chests. The Iraqi Minister reiterated that “Turkey and Qatar’s support for the armed opposition in Syria amounts to a declaration of war on Iraq, which would suffer the consequences of a conflict that becoming increasingly sectarian next to it.” 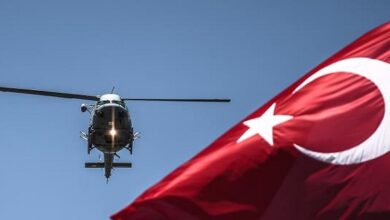 PKK militants claim to have shot down Turkish helicopter in Iraq

Iraqis go to polls despite threats from terrorist groups

Muqtada al-Sadr: the country is passing through political and security crisis.

ISIL has no future in region: Nasrallah, Maliki