The continuation of consultations between Iraqi political groups for forming the new government has still overshadowed the country’s domestic atmosphere. Bringing up different options for the premiership post is another issue which attracted the attention of the media. According to the Shitte News, The order of the manual recount of the votes of Baghdad province was also another important news regarding Iraq. Â However the occurrence of several blasts in Baghdad and Al-Anbar represents that a new plot against Iraqi political trend is taking place. The killing and arrest of some Al-Qaeda leaders proved the ability and effectiveness of Iraqi security and intelligence agencies. The commander of US occupying forces in Iraq General Raymond Odierno said some 50,000 US occupation forces will pull out of Iraq by the end of August. Iraq is still the scene of political consultations among political groups for forming the new government. At the same time, the talks between State of Law government and the National Alliance centered on the Supreme Islamic Assembly has entered a critical phase. Due to some differences, the two Shiite sides have not reached an agreement yet. But according to the members of both coalitions, both have been getting close for final agreement. Meanwhile, the Al-Iraqiya Coalition led by Ayad Allawi is trying to exploit the current situation to attract other political currents. However, news circles regard the chance of Al-Iraqaiya Coalition for uniting with Iraqi main currents as less likely. But what is obvious in the Iraqi political scene is the emphasis of Iraqi politicians to form a coalition government in which all political groups are present. Iraq’s Independent High Electoral Commission last week announced readiness for a manual recount of votes cast in Baghdad’s polling stations during the country’s March 7 elections. A judicial panel announced the recount last Monday in response to complaints of widespread fraud from Prime Minister Nouri al-Maleki’s State of Law bloc, which narrowly lost to former Premier Ayad Allawi’s Al-Iraqiya. Electoral commissioner Hamdiya al-Husseini saying that they have no problem with the manual recounting of the votes in accordance with the court order added that the commission began preparing for the recount following the court order. Husseini said the recount, started from Saturday, would involve 11,000 polling stations in the capital, adding it would take no more than 10 days to recount the ballots. Results from the elections showed Allawi’s Al-Iraqiya winning 91 seats in the 325-member parliament, with Maleki’s coalition on its heels with 89 seats. The National Iraqi Alliance followed with 70 seats. The State of Law coalition dismissed allegations that the court’s decision came under the government’s pressure, saying the bloc had presented over 4,500 manipulated ballot forms to the court. Last Friday Baghdad and Al-Anbar witnessed a bloody day. Due to a chain of terrorist operations and consecutive explosions in the Iraqi capital and the Al-Anbar province, almost 300 people were killed and wounded. The terrorist operations took place in Baghdad following the recent killing of a number of Al-Qaeda ringleaders throughout the operations of Baghdad administration in a crackdown on terrorists. In fact, a number of major Al-Qaeda leaders were killed during the operations of Iraqi forces. Meanwhile, a number of Iraqi officials have considered the terrorist operations in Baghdad and Al-Anbar on Friday to be a retaliatory move by the Al-Qaeda terrorist group. The spokesman for Sadr Movement accused the US and Al-Qaeda of perpetrating these heinous crimes. The fact of the matter is that on the one hand the US, as the occupying force in Iraq during the past seven years, has not taken any serious measure to confront the saboteurs of security in Iraq, and has never cooperated with the Iraqi security forces. And on the other, there are well-established documents that show the links between the American circles and active terrorist groups in Iraq have always played a pivotal role in shaping of waves of insecurity in this war-torn country. Undoubtedly, one of the main goals of the plotters and perpetrators of terrorist operations has been to impact the current situation in Iraq, especially the talks for establishment of the government in Iraq. Hence, Baghdad’s security forces have adopted especial measures in the Iraqi Capital to maintain the security of Baghdad and to foil the conspiracies and plots that have targeted the political process in Iraq. Source: IRIB 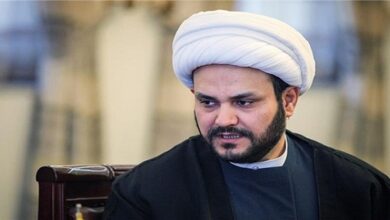