The negotiatioins between the Iraqâ€™s two main shia blocs State of Law Coalition and Iraqi National Alliance to form the next government in Iraq apperas to be nearing a conclusion, with the main sticking point being how to nominate a prime minister, official said. According to

Â the Shiite News Correspondent, A hotly contested general election on March 7 brought Prime Minister Nouri Al Maliki’s State of Law coalition 89 seats, two behind Iraqiya coalition headed by former Prime Minister Iyad Allawi. The results must still be certified. Maliki’s State of Law alliance has been in merger talks with the other main Shia grouping, Iraqi National Alliance (INA), which gained 70 seats. Together, the two could have a working majority in the 325-seat parliament. “I think we are in the final stages of putting together the last touches before announcing this alliance,” said Ali Al Adeeb, a close ally of Maliki. “I think within the next few days, we will announce this alliance.” But the party of anti-US cleric Moqtada Al Sadr, which accounts for about 40 of INA’s seats, has made it clear it does not want Maliki reappointed. Maliki sent Iraqi troops backed by US firepower to crush Sadr’s paramilitary Mehdi Army in 2008. Sadrist opposition has dimmed Maliki’s chances of a second term. While the question of who will be prime minister was still up in the air, the INA and State of Law have moved close enough that representatives say a deal could come within days. “In principle we … have agreed on forming one coalition,” Amar Tuma, a lawmaker from Fadhila, a party in the INA. Tuma said a committee has been formed with equal representation from both State of Law and INA to “settle all disputes” and create a mechanism to select a prime minister. 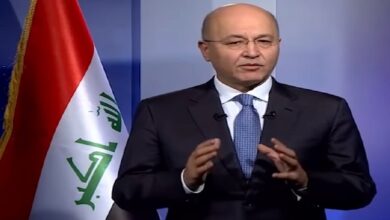 We will not give up until ISIS remnants are eliminated: Iraqi President