Tens of thousands of Iraqis have gathered in the holy Shrine city of Najaf to mark the seventh anniversary of the US-led occupation of the country in 2003. According to the Shiite News, They were Carrying Iraqi flags and shouting slogans such as “Yes, yes to unity” and “Sunni and Shia Muslims, we won’t sell this country,” protestors marched across the shrine city on Friday, calling for the release of detainees held in US-run prisons. They trampled on American, British and Israeli flags and called for an end to the presence of foreign troops and military contractors in Iraq. In an address read to tens of thousands of supporters at a rally, Noted Shia Cleric Muqtada al-Sadr said that without Iraqi unity â€œthe occupation and its advocates will stay in Iraq without fear.â€ â€œYou, the Sunnis of Iraq, joined hands with the Shias to liberate our country. Do not let the [US] occupation or any unjust law made by it deter you from doing that,â€ he said in the address read by aide Hazem al-Araji. The US and British governments led the invasion of Iraq in April 2003 under the pretext that former dictator Saddam Hussein had weapons of mass destruction, a claim proved wrong by their failure to uncover any such weapons years after the occupation of the country. The invasion that was to bring democracy to Iraq not only failed to heal the nation’s wounds sustained during years under Saddam’s brutal rule, but also added to the plight of Iraqis by opening the gates for al-Qaeda militants and Wahhabi extremists to engage in a years-long bombing spree and bloodshed in the country. Nearly one million Iraqi civilians have lost their lives since 2003 while thousands of American troops remain on Iraqi soil and are scheduled to leave the war-torn country later this year. 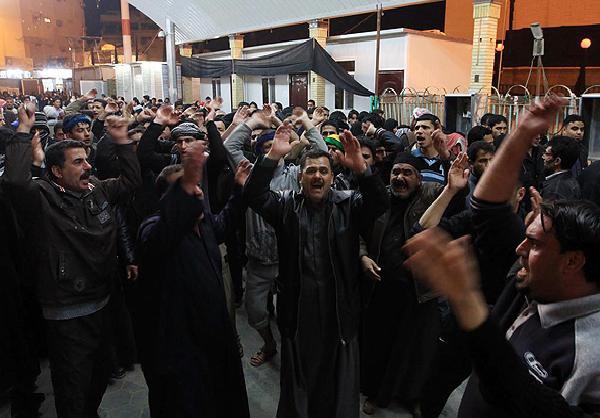