Political sources expected possibility of nominating Islmic Dawa Party leader, Jaffar al-Sadr for the Premier post of Iraq to be the unexpected figure highlighted by foreign diplomatic personalities.” According to the Shiite News, Jaffar al-Sadr is the son of the Higer religious authority Shaheed Ayatullah Syed Mohammed Baqir al-Sadr who was executed by the former Military dictator Saddam Hussain on April, 9, 1980. Jaffar is a Youngman in the forties of age and a candidate within the State of Law’s Coalition headed by the Iraqi Prime Minister Nouri al-Maliki, who is also the leader of Islamic Dawa Party. Some politicians and diplomatic figures expected to nominate Jaffar al-Sadr to replace Nouri al-Maliki in case some blocs rejected nominating Maliki for another term.Â  Sadr trend Political party led by Noted Iraqi Cleric Syed Muqtada al-Sadr also against the nomination of Iraqi Prime Minister Nour al-Malkik for another term. The State of Law Coalition (SLC) denied these reports when the spokesperson of the SLC Hasan al-Sineid stated “The SLC adheres to nominate Maliki for the Prime Minister post.” Some politicians believe that Jaffar al-Sadr represent a compromise since the Iraqi National Alliance and the some other groups do not wish to nominate Maliki for another term due his style of ruling. Jaffar finished his higher religious education and then turned to study law to get the M.A. in international law. Later, he decided to leave his religious fashion and wear the modern suit, and stated several times that he wishes to “establish a modern civil state in Iraq.” It is expected that “Regional pressure would be practiced on political blocs to form the cabinet as soon as possible, because delay will result in a political void that would negatively affect the citizens.” However, Early results from Iraq’s parliamentary elections show State of Law Coalition led by Iraqi Prime Minister Nouri al-Maliki in the lead. Local officials said Maliki’s political bloc was so far leading in nine of Iraq’s 18 provinces. Official final results are not due until the end of March and, after that, it is likely to take months before a new government is formed as no political bloc is set to emerge dominant from the vote. 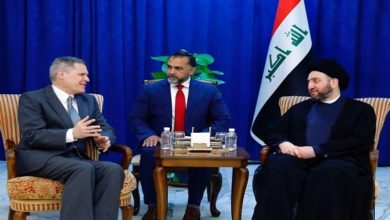 Iraq problems must be resolved without any foreign intervention: Hakim

Detained man is not al-Qaeda in Iraq leader: Official