The head of the Supreme Iraqi Islamic Council, Syed Ammar al-Hakeem, warned from what he called as plots against Iraq. According to the Shiite News Correspondent, Ammar Al-Hakeem stated before a crowd of Muthana people â€œThe next stage is so critical and important in the history of Iraq and we have to follow the model of the Holy Prophet Mohammed (SAWW) and his progeny (AS).â€ He assured â€œWe are in need of the efforts of all Iraqis to participate in the next elections to elect the best candidates as the religious authority, Ayatullah Syed Ali al-Sistani, stressed in his statement.â€ â€œOur duty is great to realize the dreams of the Iraqis,â€ he added, noting that â€œThe Iraqi National Alliance is the capable slate to assume the responsibilities and to defend the Iraqis rights.â€ â€œWe will keep on fighting corrupted people and support all the young people,â€ he concluded. Without naming Saudi regime, he criticized the elements which are involved in the plots of vote buying and promoting the tribal differences among the Iraqiâ€™s for their evil desires. However, Grand Ayatollah Ali al-Sistani has issued a Fatwa (religious ruling), declaring vote-buying as Haraam (forbidden) ahead of the countryâ€™s parliament elections. It may be noted here that the Iraqi parliamentâ€™s election will be held on March 7. United States and Saudi Arabia are hatching the conspiracies to buy the vote for Saddam loyalists Baathist regime. 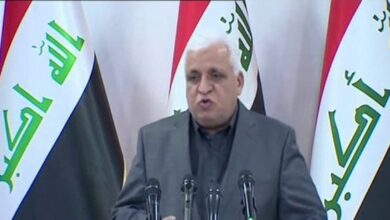 Falih al-Fayyadh: US military forces must withdraw from Iraq

Over 40 martyred, more than 80 injured in Iraq blasts