A string of three explosions martyred Six shiite pilgrims including a woman and child on Friday in coordinated bomb attacks in the holy Shiite city of Najaf, emergency services said.
According to the Shiite News Correspondent,

Â Luay al-Yasser, head of the provincial council’s security committee, said that two of the blasts were roadside bombs, but the cause of a third explosion was unclear.
The security official said that three bomb blasts targeting Shiite pilgrims near the outskirts of the holy city of Najaf have martyred at least six people and wounded 40.
He said that the bombs exploded Friday on the road to Kufa, one of the main routes to the southern holy city of Najaf.
Al-Kindi, the director of the Najaf medical center, said those who martyred in the bomb blasts were pilgrims.
The blasts are the latest in a string of attacks that have killed or wounded hundreds of Shiite pilgrims in Iraq in recent weeks.
It may be noted here that hundreds of thousands mourners have been assembling in the holy city of Najaf to present their profound condolence marking the sad occasion to Ameer-ul-Momineen Hazrat Imam Ali (AS) on the martyrdom of holy Prophet Mohammad (SAWW).
It has been a religious practice of every year that mourners gather in the holy city of Najaf to commemorate the martyrdom anniversary of the Holy Prophet Mohammad (SAWW) and his progeny (AS) at the holy shrine of Imam Ali (AS).
It was Safar 28 when the chief of prophets, Prophet Muhammad (SAWW) and his grand son Hazrat Imam Hassan (AS) were martyred. 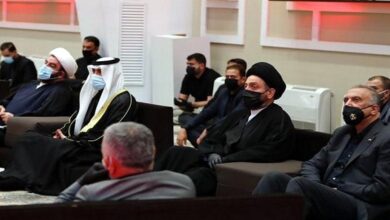