Iraqi forces managed to capture a key air base north of the city of Kirkuk along with several strategic locations to the south as part of their push to wrest control of the disputed area from Kurdish Peshmerga forces.

Wasta Rasul, commander of Peshmerga forces in southern Kirkuk Province, confirmed this saying, “The Peshmerga failed to defend themselves in Kirkuk and retreated from the K1 airbase,” Radio Nawa reported.

Rasul added that during the clashes around the airbase, seven Peshmarga forces were killed and 17 others went missing.

The territory captured included a key airbase called K1, the North Gas Company station, a nearby processing plant, a power plant and an industrial district, according to an Iraqi military statement.

The Iraqi armed “forces are continuing to advance,” it added, Reuters reported.

According to Kurdish and Iraqi officials, artillery fire is being exchanged with government forces to the south of the city.

Later in the day, Iraqi forces seized full control of Tuz Khurmatu district, according to a military officer.

Turkmen leader Niazi Oglu said the district is now under the full control of the government forces.

He said six government forces were killed and dozens injured in artillery shelling by Kurdish forces of the center of Tuz Khurmatu district.

A series of videos and images circulating on social media appear to show Peshmerga troops running for the lives in different areas of the oil-rich city.

The latest incidents come amid simmering tensions between the central government in Baghdad and the Kurdistan Regional Government (KRG) over a recent controversial referendum on the secession of the semi-autonomous Iraqi Kurdish region.

The plebiscite took place on September 25, sparking strong objection from Baghdad. Iraq’s neighbors and the international community also voiced concerns about the repercussions of the vote, which was only supported by Israel.

Kirkuk, with some 10 percent of Iraq’s oil reserves, has long been contested by Baghdad and Erbil. 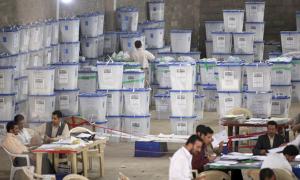