A Yazidi woman sold as a sex-slave eight times by an ISIS terrorists says she was put on parade like she was being picked out in a ‘car showroom’.

Khalida, 20, was kidnapped and taken to Raqqa where she was put on display in a ‘meat market’ where women are purchased for as little as a mobile phone, or simply given away as ‘gifts’.

The most beautiful women are put into a separate ‘VIP’ room where leaders can take their time choosing their favorite three or four girls each.
Khalida was bought by an old man with a white beard and kept in a small room where he raped her – and then beaten by his wife for ‘tempting’ her husband.

But it was only the beginning of the horror: she went on to endure months of daily abuse, torture and brutality at the hands as she was bought and sold by eight men.

The quiet, slight-framed, woman tried to kill herself many times to end her terrible ordeal and even tattooed her father’s name onto her arm so her body could be identified after her death.

The courageous young woman – who was held for 16 months, finally won her freedom after she convinced her ‘slave master’ to sell her back to her family for $24,000.

Now she bravely breaks her silence to tell the world, Khalida told MailOnline: They did everything to me. But I want people to know what happened to me so that the world understands how the Yazidi people have suffered.’

Her ordeal began in August 2014 when her family were denounced as ‘unbelievers’ by former neighbors as they tried to flee their hometown of Sinjar after it had been overrun by ISIS fighters.

Khalida told MailOnline: ‘Our neighbors said they would protect us, but when we were stopped at a checkpoint one of them pointed us out to the foreign [ISIS] fighters and said we were Yazidi. And we were all taken. There were 36 of us.’

The family were separated by sex. To this day Khalida does not know what happened to the men – her father, her uncles, some of her brothers.
The women were separated again – married and unmarried. Put with the single women Khalida and her cousins were taken to a big hall. An ISIS fighter took their photographs.

Among 800 other young Yazidi women terrified Khalida was taken by bus to the ISIS capital Raqqa, passing through her destroyed town on the way.

She said: ‘I saw dead bodies – children, women and men – along the roadside. My eyes were scarred by what I saw and I had to hold my nose against the stench.’

In Raqqa the women were put on parade in a big room, which Khalida describes like a ‘car show room of girls’.

She told MailOnline: ‘We were put on display. Men came in and looked at us like objects. It was like a car showroom. Women were bought for cash – as little as $20, or exchanged for things like mobile phones, or given away as gifts.

‘The most beautiful women were put into a special room. Then five top ISIS leaders – emirs – came to choose girls. They took away three or four girls each.

‘I was very afraid. I didn’t know what would happen to me – raped, murdered?’

Khalida and her cousin were bought by an old man with a long white beard, a Syrian known as Abu Qalla, who took them to the home he shared with his wife and children.

Locked into a room for two weeks the terrified young women could hear the family through the wall but knew nothing about the horrendous abuse they were to suffer.

Then one day the Abu Qalla raped Khalida’s cousin in front of her. His wife later beat the girls, accusing them of ‘tempting her husband’ and branding the pair as ‘infidels’.

The wife said: ‘You are Yazidi. You deserve what you get.’

Over the following year and four months Khalida, who stands just 4ft 11in tall, has a small button nose, rosy cheeks, downy skin, and an engaging lisp, endured the most degrading sexual and physical abuse.

Raped up to three times a day her ‘slave master’ or gang-raped by groups of ISIS fighters, this quiet young woman was bought and sold by eight different men – each more brutal, callous and perverted than the last.

She told MailOnline she was force-fed contraceptive pills and once taken to hospital for a contraceptive injection after she was rendered unconscious by one particularly brutal gang rape.

‘They [ISIS] did not want me get pregnant, especially if there was more than one man because they would not know who the father of the baby was,’ she said.

During her 16-month ordeal Khalida escaped three times, seeking sanctuary at the homes of three Arab families and appealing to them to contact her family.

But each time she was denounced to ISIS and returned to her brutal ‘slave master’.

‘I told them, help me, get me out of here and my family will give you anything you want, name your price,’ Khalida said.
‘But they said: “You are Yazidi, an infidel, we refuse to help you.”’

Khalida tried to kill herself many times, in an attempt to free herself from the terrible abuse she was suffering.

She tattooed her father’s name on her arm so her body could identify her body after her death.

She told MailOnline: ‘I tried to kill myself many times. I covered myself in water and put my hand on electric cables but I always survived.

‘I asked God to kill me. I thought it was better to die than to live as a sex slave with what they were doing to me, every day.’
However she survived.

Ultimately Khalida threw herself upon the mercy of her final ‘slave master’, and appealed to him to free her from the misery ISIS had condemned her to.

Her last captor, a Syrian man called Nasser, finally agreed to release her – and forced her to barter for her freedom. He judged her family must pay $30,000 [£20,000] even though they were poor and homeless.

‘I begged him and kissed his feet begging for him to contact my family,’ Khalida told MailOnline.

‘I told him I had been enslaved for over a year and had heard nothing about my family. I begged him every day for two months.

‘Finally he let me call my brother Faisal. Nasser told him he would sell me for $30,000.

‘I told him my family were poor and had nothing, that they had abandoned their home.

‘I had to barter for my life. Finally he agreed to sell me for $24,000. Nasser contacted a man in Iraq. My brother paid a deposit.

‘I was taken to a village near the front line near Mosul. I had to walk for five hours and I called to the Peshmerga fighters.’

Talking by torch-light in a cold, unfinished flat, in Duhok, northern Iraq, this brave young woman has vowed not to let her 16-month ordeal define her life.

She told MailOnline: ‘Before the war I had a happy life. I lived with my family, helping my mother around the house with the cooking and the cleaning.

‘Now my dream is to be able to read and write, because I was not able to go to school when I was young.

Traditionally Yazidi women are forbidden to marry – or have sexual relations – outside of their community, or even their caste, and are expelled if they do so.

However the Yazidi spiritual leader, Baba Sheikh Khurto Hajji Ismail, made a declaration supporting the 800 women abducted and sexually abused by ISIS, to ensure they were allowed back into their tight-knit community.

‘The Baba Sheikh wrote a letter supporting women like Khalida, to make sure they were not expelled or shunned from their community,’ said Dr Saeed Dakhil Saeed, president of the Sinjar Foundation, which supports Yazidi victims of sexual violence and other kidnapped refugees. 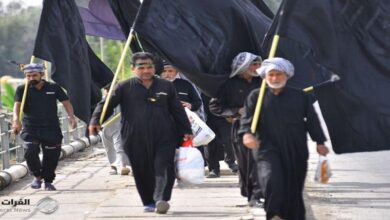 Pilgrims continue to walk toward Samarra+Photos