At least 12 people have been killed in a truck bombing attack in the Iraqi city of Basra, Iraqi security forces say.

According to the Iraqi security forces, at least 42 others sustained injuries in the truck bombing attack in the city on Wednesday, the Iraqi al-Forat news agency reported.

According to the news agency, a similar attack earlier in the day targeted a gathering of truck drivers near a water purification station at the road linking Umqasir and Safwan districts in Basra.

No group has claimed responsibility for the bombings, but such incidents are often attributed to the ISIL Takfiri terrorists.

According to the UN Assistance Mission for Iraq (UNAMI), a total of 1,103 Iraqis lost their lives last month, while 2,280 others were injured as a result of terrorist attacks across the country.

The UN mission said 611 civilians were among the fatalities. The number of civilians injured stood at 1,353. Violence also claimed the lives of a further 492 members of the Iraqi army, while 927 others sustained injuries.

A great portion of the casualties was recorded in Baghdad Province, where more than 320 civilians were killed and over 870 others hurt.

ISIL started its campaign of terror in Iraq in early June 2014. Iraqi army soldiers, police units, Kurdish forces, Shia volunteers and Sunni tribesmen have been engaged in joint offensives against the terrorists. 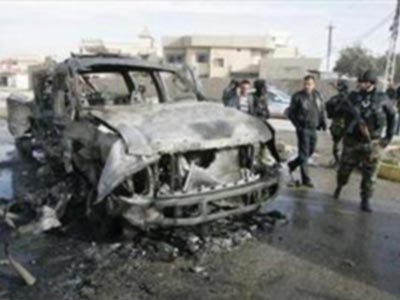