At least three Turkish soldiers have been killed during a new offensive against the outlawed Kurdistan Workers’ Party (PKK) in northern Iraq, Turkey’s Defense Ministry says.

The ministry said on Thursday that two Turkish soldiers were killed and two others injured Wednesday in clashes with the terrorists.

Another soldier was killed on Thursday, said the ministry, without providing casualty figures for the PKK.

Turkey on Wednesday launched operation “Claw-Eagle 2” against the PKK militants holed up in the northern Iraqi region of Dohuk.

The country launched its first “Claw-Eagle” operation in June.

In recent years, Turkish ground and air forces have been carrying out vast operations in northern Iraq, southeast Turkey and northern Syria. The attacks have triggered protests from Baghdad and Damascus which consider them a violation of their sovereignty.

The US has been arming and training Kurdish militants under the banner of helping them fight Daesh terrorists.

Syria and several other countries see ulterior motives behind the US support.

Turkey, a key US ally in the region, has repeatedly questioned Washington’s arming and training of the Kurds.

The PKK, listed as a terror group by Turkey and much of the international community, has for decades used Iraq’s mountainous areas as a springboard for attacks on Turkish troops.

The militant group has been seeking an autonomous Kurdish region since 1984.

More than 40,000 people have been killed in the decades-long conflict between Turkey and the Kurdish militant group.

28 martyred and injured in bomb blasts in Shia majority areas 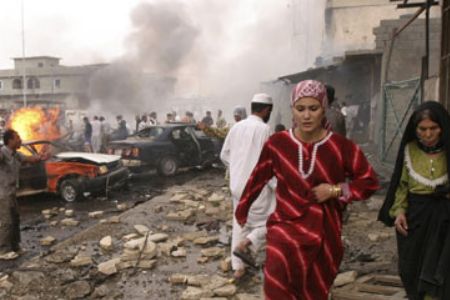