Iraqi resistance group “Ashab al-Kahf” targeted US military convoy by a bomb blast near the northern city of Salah al-Din in northern Iraq on Wednesday night.

The bomb exploded near the Makishifa area of Iraq’s Salah al-Din province. According to local media outlets, the Iraqi resistance group “Ashab al-Kahf” claimed responsibility for the attack.

The US embassy in Bagdad and its terrorist bases in Iraq, including Al-Taji and Al-Balad, have been targeted by rockets several times in recent months.

Yet there were no immediate reports of injuries or severe damage.

Many Iraqi people and groups urge the US terrorist forces’ withdrawal from Iraq, and the Iraqi parliament has approved a plan for the withdrawal of these forces.

Iraq’s parliament passed a resolution calling on the government to end all foreign troop presence in Iraq.

Iraqi Forces Impose Control over Most Important Border-Crossing with Syria 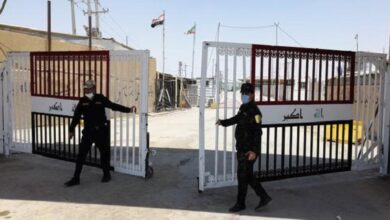