Four Iraqi soldiers have been killed and wounded in an attack by ISIS elements on an area in Diyala province in eastern Iraq.

According to Iraqi local media reports, ISIS terrorists killed a policeman and wounded three others in an attack on a checkpoint in the ‘Abu Khanazir’ district on the outskirts of ‘Abi Sida’ in ‘Diyala’ province, a security official said today.

Diyala province becomes one of the main centers of the remnants of ISIS terrorists in Iraq.

Sadegh al-Husseini, one of the senior commanders of the Iraqi Popular Mobilization Forces (PMU) or Hashd al-Shabi, said that due to the ability of our forces the PMU has been tasked with managing the security of a large part of the border between Diyala and Saladin provinces along with the Iraqi Army and other security forces.

Hashdal al-Shaabi also announced on Saturday that it has launched a security operation around the city of ‘Khanaqin’ in Diyala province with the aim of pursuing ISIS elements.

Backed by the US and its allies’ military and financial support, ISIS terrorist group attacked Iraq in 2014, occupied vast areas of the country’s north and west, and committed a myriad of crimes.

A cache, prepared to smuggle to Syria, seized in Nasiriyah 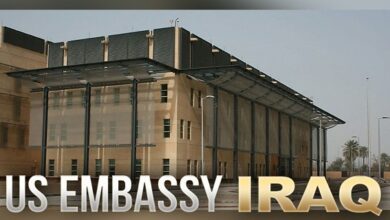 No embassy in the world has the same weapons as US Embassy in Baghdad: Iraqi MP