The Iraqi Foreign Ministry says a group of more than eighty Azerbaijani children, whose mothers are being held in the Arab country for membership in the Daesh Takfiri terrorist group, have been repatriated from Baghdad to the South Caucasus country.

The ministry’s spokesman, Ahmad al-Sahhaf, said in a press release that the repatriation of the 82 children took place on Wednesday.

Sahhaf noted that the return took the number of foreign Daesh children repatriated to their respective countries to 828.

Back on October 12, 2019, Uzbekistan’s Foreign Ministry said more than 60 Daesh children had arrived in the Central Asian country from Iraq.

The ministry announced in a statement that 64 children were brought home by plane thanks to a joint effort involving the authorities of both countries and the United Nations International Children’s Emergency Fund (UNICEF).

It added that the children – fourteen of them under the age of three – had suffered “moral, psychological and physical problems” after their parents chose “a wrong path” by joining militant groups in Iraq.

Back on May 29 last year, Kurdish authorities in northeastern Syria handed over 148 Uzbek women and children linked to Daesh to diplomats from the Central Asian country for repatriation.

Uzbekistan has provided some 1,500 soldiers to Daesh in Iraq and Syria, according to the Soufan Group, a New York intelligence consultancy.

Daesh has claimed that Uzbeks were responsible for some of its most high-profile bombings in Iraq.

Former Iraqi prime minister Haider al-Abadi declared the end of military operations against Daesh in the country on December 9, 2017.

On July 10 that year, he had formally declared victory over Daesh in Mosul, which served as the terrorists’ main urban stronghold in Iraq.

Iraqi forces took control of eastern Mosul in January 2017 after 100 days of fighting, and launched the battle in the west on February 19 last year.

Rockets scatter after blast at arms depot in Baghdad 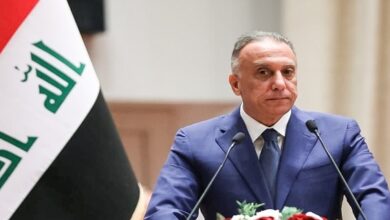 Iraqi PM Al-Kazemi announced withdrawal of US from Iraq confirmed