The ceremony was held on Thursday at the site of a drone attack just outside the airport by terrorist US forces on January 3. The operation was conducted on direct order of the US President Donald Trump after which the US Department of Defense claimed responsibility for the assassination.

Iraqi mourners condemned the US assassination of top Lt. Gen. Soleimani, Abu Mahdi al-Muhandis and their companions, calling for the immediate withdrawal of US troops from their country.

The US assassination of the top Iranian commander along with Muhandis sent shock waves across the world while, at the same time, forging greater unity in the region against US interventionism, with insistent calls for revenge being echoed across the Muslim world.

Both Soleimani and Muhandis played a key role in defeating Daesh which at its peak, threatened a complete take-over of Iraq and Syria.

Gen. Soleimani’s popularity transcends geographical boundaries, and many people across the Middle East and beyond regard him as the figurehead in defeating Daesh and other Takfiri groups.

Hundreds of thousands of Iraqis chanting “Death to America” joined the funeral procession for Gen. Soleimani and Muhandis in Baghdad and the holy cities of Karbala and Najaf.

Iraqi lawmakers also took action by unanimously approving a bill, demanding the withdrawal of all foreign military forces led by the United States from the country.

Commemoration ceremonies similar to the one held in Iraq on Thursday are being held across Iran. 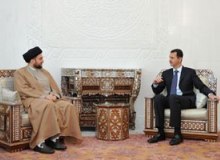 Iraq’s Anti-Terror Success to Give Rise to Karbala Pilgrims: Official