Leader of the Islamic Revolution Ayatollah Seyyed Ali Khamenei has praised outgoing President Mahmoud Ahmadinejad and the administrationâ€™s cabinet members for their efforts.
Ayatollah Khamenei made the remarks at a meeting with the Iranian president and his cabinet members in Tehran on Sunday.

The Leader criticized measures to underestimate the efforts of the government, saying the Iranian nation must be notified of the administrationâ€™s services.

â€œSome even deny the administrationâ€™s concrete actions, but what matters is that the efforts and attempts be expressed and recorded in the countryâ€™s public scene,â€ Ayatollah Khamenei stated.

The Leader of the Islamic Revolution also referred to some of the outstanding characteristics of the outgoing administration such as the speedy implementation of huge projects.

President Ahmadinejad will be succeeded by President-elect Hassan Rohani.

Rohani won 50.7 percent of the vote to secure an outright victory. 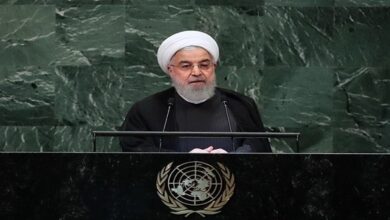 President Rouhani: US Can Impose Neither Negotiations, Nor War on Iran