The Leader of Islamic Revolution, Ayatollah Seyed Ali Khamenei, has pointed out that the only option for the Islamic Ummah toward honor and dignity is to learn lessons from the grand characteristics of the Prophet of Islam, Mohammad (blessing of God upon him and his progeny).

An address to the Islamic system’s officials, and the guests, participating in the Islamic Unity Conference, on Friday, concurrent with 17th of the Islamic month of Rabi al-Awal, which marks the birth anniversary of Prophet Mohammad (SAWA), and Imam Jafar Sadeq (PBUH), the Leader of Islamic Revolution named this day as the biggest Eid of mankind throughout the course of history.

The Leader of Islamic Revolution reminded that Prophet Mohammad (SAWA) is the symbol of knowledge, trustworthiness, justice, ethics, kindness, and confidence in divine vows, adding that throughout the course of history and despite all the materialistic progresses of mankind in life, human beings have always sought these elevated values and characteristics, while today the Islamic Ummah is in need of these elevated features more than others.

In further remarks, the Leader emphasized on the need for fraternal behavior, patience, and kindness among Muslims, while adding that one of the other current needs of Islamic Ummah is confidence about divine vows because the Almighty has vowed that the outcome of struggles, efforts, and steadfastness of Islamic Ummah against pressures; and the refusal of Islamic Ummah to submit to worldly riches is fulfillment of the Islamic Ummah’s goal and ideal.

Furthermore, the Leader of Islamic Revolution referred to unity and solidarity as one of the essential needs of Islamic Ummah, while mentioning the awakening of nations and Islamic uprisings in the region, and pointing out that the regional developments and revolutions and the consecutive retreats of the US, and Global Arrogance, in addition to fragility of the Zionist regime of Israel, have risen unique opportunities for the Islamic Ummah, which should make the best of these opportunities.

The Leader of Islamic Revolution went on to say that in the era, throughout which the hegemonic powers imagined they have wiped out any grounds for emergence of spirituality and demands for the rule of sacred religion of Islam; all of a sudden; the grand, lasting, and historical voice of Iran’s Islamic Revolution scared the enemies, and raised hopes of the intelligent and prudent friends and vigilant and insightful human beings.

“Language of Might” Iran’s Viable Option after Mina Deaths: President 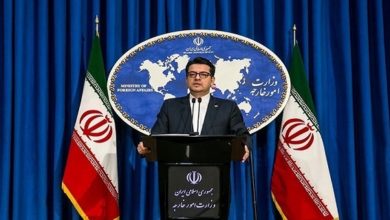