Iran’s Judiciary Chief Sadeq Amoli Larijani described the recent US attacks against the positions of the Islamic State of Iraq and the Levant (ISIL) as only a tricky plot, and said the terrorist group has been formed by Washington and its allies.

“How can one believe that the US is opposed to the Daesh (the abbreviated name of the ISIL in Arabic and Farsi) Takfiri group? If the Americans really have a problem with Daesh, why haven’t they entered the scene since the very first day of its appearance? Why haven’t they attacked Daesh in the entire region, specially in Syria,” Amoli Larijani asked, addressing high-ranking judiciary officials in a weekly meeting Tehran on Wednesday.

He said the ISIL has been created by the colonial powers, and stressed that the recent US attacks on the terrorist groups’ positions in Iraq are, at best, “suspicious”.

Amoli Larijani warned the colonial powers and the reactionary regimes which support the ISIL that such advocacy will backfire on them on the day when the group is annihilated in Iraq and political stability and tranquility is restored to the country.

In relevant remarks on Sunday, Iran’s Parliament Speaker Ali Larijani cautioned that the US bombing of ISIL centers in Iraq in recent days was aimed at diverting attention of the world public opinion from the Israeli crimes in Gaza, but said the US will fail in achieving its desired results from this operation and had better ask for Hollywood’s help.

“The reality is that the US administration is neither a supporter of the Shiites, Sunnis, Christian, Yazidis, Kurds or Arabs nor an advocate of human rights as it has a too dark record to be like this,” Larijani said, addressing the lawmakers at an open session of the parliament here in Tehran.

“The US wants to wash off blood from its hands which have been stained in the inhumane catastrophes that it has caused in Palestine, Syria, Lebanon, Iraq and Iran by sending a number of fighter jets to bring aids or target the terrorists, but it is just a dream which will never come true,” he added.

Larijani advised US President Barack Obama to find another way to divert attention of the public opinion from the crimes committed by the Zionists in Palestine, and said, “Maybe Hollywood can be of more aid to the US (administration).” 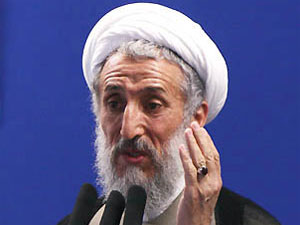 ‘Beware of enemy’s seeds of discord’