An annual report issued by the United States Commission on International Religious Freedom (USCIRF) found that the Al-Khalifa regime continued its discrimination and repression of the Shi’a Muslim community on the basis of their religious identity in certain areas, indicating that Shiites were denied employment.

A delegation from the commission visited Bahrain last month and met Chief of Public Security Tariq Al-Hassan and President of the National Institution for Human Rights Maria Khouri.

The commission said in its 2019 report that the Bahraini government arrested some Shi’a Muslim clerics during Ashura religious observances, allegedly for “inciting hatred.”

It also said that some Shi’a Bahraini candidates were prevented from participating in the parliamentary elections held in 2018, indicating that several party leaders were arrested or remained in jail.

USCIRF noted that discrimination against Shi’a Muslims in government employment and some public and social services also continued, even though Bahrain’s laws affirm principles of nondiscrimination.

The commission called on Bahrain to abide by local laws and its international obligations that prohibit employment discrimination on the basis of sectarian affiliation; and to continue to train security officials, prosecutors, and judges to better address sectarian violence and incitement by enhancing programs that promote sectarian reconciliation, support the rule of law, and counter violent extremism-such as ongoing community policing initiatives.

It also pressed Bahrain’s government to provide accountability for past abuses against the Shi’a Muslim community, and unconditionally releasing prisoners.

Bahrainis protest against UK military base 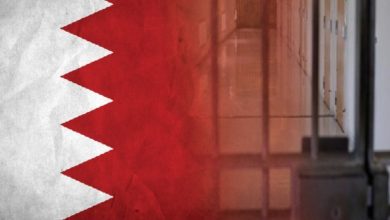