Scores of religious figures and analysts in the Indian-administered Kashmir region and in Nigeria have voiced their support for prominent Bahraini Shia cleric Sheikh Isa Qassim, and expressed protest at the Al Khalifah regime’s decision to strip him of his citizenship, Press TV reports.

On Friday, Kashmiri religious and political leaders described the move against the spiritual leader of Bahrain’s main opposition bloc, the al-Wefaq National Islamic Society, as “provocative” as it could stoke sectarian tensions and promote further mistrust in the Arab country.

“By the incarceration of opposition figures, the destruction of places of worship and the revocation of citizenship, the Persian Gulf kingdom of Bahrain is adding fuel to the fire,” Aga Syed Hasan Almosvi Alsafvi, the president of Anjuman-e-Sharie Shian, told Press TV. “It seems the Manama regime is toeing the line of Saudi Arabia by resorting to brutal force to suppress dissent.”

Masroor Abbas Ansari, a member of the Jammu & Kashmir Ittihadul Muslimeen (JKIM) political party, said, “The move is highly condemnable. His only fault is that he is demanding greater civilian and political rights for his people.”

“The decision against Sheikh Isa Qassim is highly deplorable. With the help of its partners, particularly Saudi Arabia and Qatar, the Al Khalifah regime has been brutally crushing largely peaceful dissent and violating the majority community’s religious freedom,” Asghar Ali Karbalai, a Kashmiri lawmaker, commented.

Separately, the Islamic Movement in Nigeria censured the measure against Bahrain’s 79-year-old top Shia cleric, saying that his citizenship revocation is part of the Al Khalifah regime’s intimidation campaign aimed at silencing dissidents.

It added that citizenship is the birth right of every person of a state and the Bahraini regime’s irrational move would increase social unrest there.

The movement further said that the Al Khalifah regime should be reminded that Sheikh Qassim has been in the hearts and minds of Bahrainis for 50 years, and his call for a peaceful and democratic change has inspired civil society and political activism.

“It is a clampdown on human rights of people of Bahrain. People of conscientiousness would not allow it to go on like that. We are calling on the international community to put pressure on the [Bahraini] government, to stop the clampdown not only on Sheikh Isa Qassim but also on other dissidents and politicians, who are either jailed or expelled from the country,” Ibrahim Musa, a member of the Islamic Movement in Nigeria, said.

Since February 14, 2011, thousands of anti-regime protesters have held numerous demonstrations in Bahrain on an almost daily basis, calling for the Al Khalifah family to relinquish power.

In March that year, troops from Saudi Arabia and the United Arab Emirates — themselves repressive Arab regimes — were deployed to the country to assist the Bahraini government in its crackdown on peaceful protests.

Scores of people have been killed and hundreds of others injured or arrested in the Bahraini crackdown on the anti-regime activists. 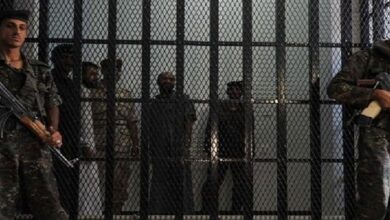