A United Nations rights group says the prominent Bahraini Shia cleric Sheikh Ali Salman has been arrested without any clear reason, calling on the Manama regime to release him immediately.

The UN Working Group on Arbitrary Detention announced in a report that the cleric was detained for exercising “his right to freedom of opinion,” adding, “The deprivation of liberty of Sheikh Ali Salman… is arbitrary.”

Salman was detained on December 28, 2014 on charges of attempting to overthrow the ruling Al Khalifa dynasty and collaboration with foreign powers. He has strongly denied the charges, emphasizing that he has been seeking reforms in Bahrain through peaceful means.

On June 16, a Bahraini court sentenced Salman to four years in prison on charges such as insulting the country’s Interior Ministry and inciting others to break the law. He was acquitted of seeking regime change.

The group also referred to several human rights violations during Salman’s trial, noting that the Bahraini court did not even allow the prominent cleric and his defense team to examine the evidence against the opposition leader.

The UN rights group further reminded the Manama regime of “its duties to comply with international human rights standards not to detain arbitrarily, to release persons who are arbitrarily detained, and to provide compensation to them.”

It also called on the Bahraini regime “to take the necessary steps to remedy the situation of Sheikh Ali Salman without delay.”
Since mid-February 2011, thousands of anti-regime protesters have held numerous demonstrations on an almost daily basis on the streets of the tiny Persian Gulf kingdom, calling on the Al Khalifa family to relinquish power.

Scores of people have been killed and hundreds of others injured or arrested in the ongoing heavy-handed crackdown on peaceful rallies; Press TV reported. 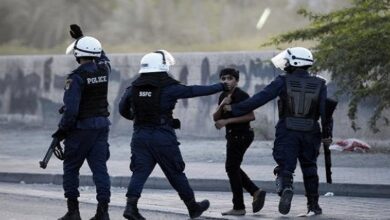