Turkey has slammed the United States for rolling back sanctions on neighboring Iran, warning Washington that its attempt to isolate Tehran is “dangerous” and unwise.

The administration of US President Donald Trump on Monday reimposed a second set of sanctions with an aim to isolate Iran’s banking and shipping sectors and slash its oil exports.
Those bans had been lifted under a 2015 multinational nuclear deal with Iran, which the US exited in May.
After leaving the deal, the US administration vowed to bring Iranian oil sales to “zero.”
It has, however, agreed to grant waivers to Turkey and seven other countries — China, India, Italy, Greece, Japan, South Korea and Taiwan — to continue importing Iranian oil without facing diplomatic consequences.
“While we were asking (for) an exemption from the United States, we have also been very frank with them that cornering Iran is not wise. Isolating Iran is dangerous,” Turkish Foreign Minister Mevlut Cavusoglu said at a press conference in Japan on Tuesday.
Cavusoglu said the fact that the US is punishing the Iranian people by the sanctions is not “fair.”
The top Turkish diplomat further called for dialog and engagement with Iran, saying sanctions would lead nowhere.
“Turkey is against sanctions, we don’t believe any results can be achieved through the sanctions,” Cavusoglu said.
Washington’s latest sanctions – which have drawn global criticism — are the second of their kind since its exit from the Joint Comprehensive Plan of Action (JCPOA). A first round of bans was reinstated in August.
Currently, Iran and its other partners in the JCPOA are working to keep the deal alive. The Europeans are also devising financial mechanisms aimed at offsetting the negative impacts of the returning US sanctions.
Besides Tehran, Ankara has been hit by a wave of economic sanctions and tariffs amid a series of disagreements between the two NATO allies.
Iran and Turkey have already agreed to promote their business ties between in a bid to counter the effect of unilateral sanctions imposed by Washington on both neighbors.
Last month, Turkish President Recep Tayyip Erdogan censured US sanctions against Iran as unjust. He said the US had taken the wrong path by threatening and using blackmail instead of dialog, and that it was impossible for any country to trust Washington.

Hundreds of protesters rally across Afghanistan for peace 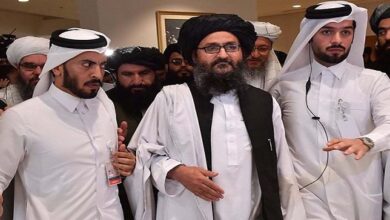