While in recent years some Persian Gulf Arab states moved towards normalization with the Israeli regime and day by day boosted their economic, security, and political ties to the Israelis, there are some Arab countries that are still, at least ostensibly, committed to continuing support to the Palestinian cause.

The 95th meeting of the Liaison Officers of the Arab Boycott Offices (ABOs) in Cairo located at the Arab League headquarters was held on Monday.

The deputy secretary-general of the Arab League said that this meeting emphasizes the important role of the Arab boycott of the Israeli regime in line with the Arab world’s position, which reflects the will of the Arab nations to defend the rights of Palestine and its recapture in accordance with international laws. The decision regarding the anti-Israeli boycott by the Arab countries, the imposition of restrictions, the inclusion of companies in the boycott list and warnings to some companies and the removal of the names of some companies that have responded positively to the boycott, as well as focusing on the continuation of the activities of the regional boycott offices and strengthening cooperation among them were on the agenda of the conference.

The boycott of Israeli goods started for the first time after the third Arab-Israeli war in 1967, and since then, some Arab countries have tried to expand the scope of the ban by holding such meetings from time to time. The Cairo meeting was held at a time when the Israeli regime is trying to normalize its relations with Arab countries in order to break its decades-long regional isolation. Although the UAE and Bahrain have agreed to normalization with Tel Aviv earlier than others, many Arab rulers refuse to approach Tel Aviv due to the sensitivity of the public opinion in the region. Therefore, the presence of some Arab countries in the Cairo meeting can be a message for the countries that are on the path of normalization that they will not have a place among other Arabs if they boost ties with Tel Aviv. If the nations of the region and public opinion join the campaign of real boycott of Israeli goods, they can voice their widespread opposition to the normalization to Arab leaders and prevent the repetition of thaw scenario by other Islamic countries.

On the other hand, since the Persian Gulf Arab states have departed from pursuit of liberation of Palestine for years and left the Israeli hands open to commit further crimes against the Palestinians, such meetings can provide hope to the Palestinian people, telling them that still there are some Arab countries that support their cause.

Although the boycott of Israeli goods in the Arab countries is considered an appropriate measure to put pressure on Tel Aviv and isolate it in the region, experience has shown that despite the holding of numerous meetings, not much success has been achieved in practice, and there are practically no bans in the world against Israeli goods except for a few countries like Iran, Syria and Lebanon. The reason why the ban on Israeli goods has not gone anywhere is partly due to the deceptive tactics of the Israelis who have chosen alternative routes to export their goods to Arab countries to avoid sensitivity.

A couple of years ago, the head of Israeli Committee for Trade, Industry, and Enterprise Development said that Tel Aviv has massive and highly active trade relations with a majority of Arab countries including Saudi Arabia and Iraq. He claimed that Moroccan and Indonesian businesspeople buy Israeli goods, remove “made in Israel” from them and send them to Saudi and Iraqi markets and so far no problem has occurred to this trade.

Talk of export of Israeli goods to Arab countries was at a time when there was no news of the normalization of Arab relations with Tel Aviv, and now that some countries have taken steps to thaw, the Israeli products can remarkably increase i. Arab shelves. Even as it can be understood from the remarks by the Israeli authorities, some goods that are exported to the Arabs have the names of countries like Jordan written on them, but the factories are actually held by Israelis. So, the Israelis use such tactics to export their goods to the Islamic world under the names of different countries without anyone realizing in which region and by whom these goods were made. Tel Aviv has always tried to present its products to the Arab countries using constant trade deception. Cyprus is among countries where Israeli goods see their labels removed and sent to Arab markets under new branding.

As part of their efforts to infiltrate Arab markets through commercial fraud, the Israelis work with a small number of corrupt importers and customs officers who break their countries’ laws to facilitate entry of the Israeli products.

In addition to secretly exporting its goods to the Arab markets, the Israeli regime also has direct trade with some of these countries. Official Israeli-Egyptian trade is limited to Egypt’s small exports to Tel Aviv, the value of which did not exceed $17 million in early 2001. This business includes spinning thread, building materials, spices, and canned food. Egypt’s imports at the same time amounted to $40.3 million and included agricultural and irrigation equipment, seeds and pesticides, all of which done with the notification of the foreign ministry.

The trade with Morocco was less than $10 million in 2001, related to a Jewish community in the country. Also, the Israeli regime has limited trade interactions with Mauritania. The trade is official and is driven by the Mauritanian government that normalized diplomatic ties with Tel Aviv and is not committed to Arab ban on trade with the Israelis.

Trade between the Israeli regime and Arab states has increased in recent years due to the normalization of relations. Some Sudanese social media users published a picture of a biscuit containing Hebrew-language writing on its package. They suggested that it was made in Israel and was found in a store in the capital Khartoum. In April 2021, the new Sudanese cabinet announced the lifting of the 1958 embargo on Israeli products, a step that paved the way for the full normalization of relations between Khartoum and Tel Aviv. Also, Israeli dates are seen, though sporadically, in the Moroccan markets. During the holy month of Ramadan, many parties and associations called for a boycott of them.

Therefore, the Arab boycott of Israeli products are practically unsuccessful as there are no documents showing that the companies making these products are controlled by the Israelis. Additionally, since many Israeli businesspeople in recent months expressed a will to invest in the UAE and Saudi Arabia, in the future they may make their products inside these countries and send them to other Arab states.

While the Israelis are resorting to any trick to get the Arabs on their side and distract the attention from the Palestinian cause, ban on the Israeli goods and pushing against normalization can block Tel Aviv way to its grim regional goals. The Israeli failure to form an alliance with Arab states against Iran demonstrated that Muslim world unity can deal a tough blow to the Israelis.

What are Israelis after in Azerbaijan? 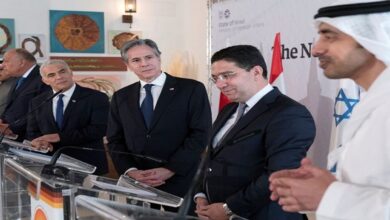