Azerbaijani and Armenian forces clashed in Karabakh disputed region recently, marking the newest round of confrontation of neighbors in a few months. The new clashes are coming as the two countries in 1994 fought a war over the contested region. Since then, they engaged in several rounds of negotiations mediated by OSCE Minsk GROUP comprising European powers, Russia, and the US.

On the first day of the war, Armenia announced “full military mobilization”, and said that it destroyed three helicopters, two drones, and three tanks belonging to the Azerbaijani forces.

On the other side, Azerbaijan stated that it killed 32 Armenian troops and destroyed two tanks and 12 air force sites. Two months ago, clashes killed at least 16 troops from both sides. Following the clashes came largest-in-years popular rallies in Azerbaijan calling for the government to mobilize its forces and take back Karabakh from Armenia. The dispute over Karabakh has been unfolding for four decades. In terms of the international laws, the region belongs to Azerbaijan. However, it is held by Armenians.

Nagano-Karabakh is a South Caucasus region that accounts for 5 percent of Azerbaijan territory. 21 percent of its population is Azeris and 77 percent are Armenians.

Each of Armenia and Azerbaijan lay claims on the region. Artsakh is its old name and is the old home of the Armenians. However, Azerbaijan calls it Karabakh and claims it to be an inseparable province of the country. But to get a clear picture of the root causes of the Karabakh dispute, we need to move back in history, to the closing years of the First World War and formation of republics of Armenia and Azerbaijan.

Following the foundation of Azerbaijan and Armenia in the middle of the collapse of the Russian Empire in 1918 and then dissolution of Transcaucasian Socialist Federative Soviet Republic, a territorial crisis emerged, deepened by the two sides’ historic mentality and grounds.

In February 1919, Azerbaijan government published a statement asserting that Karabakh was part of its territory. When the Bolshevik rule was extended to Caucasus, Moscow recognized the region along with Nakhchivan and Zangezur as part of communist Azerbaijan Republic. When Armenia joined the Soviet Union, this stance was quitted by Moscow and Azerbaijani government abandoned their claims, hence allowing Karabakh and Nakhchivan to remain part of Armenia.

This changed as the Soviet Russia changed its policy. In 1921 Turkey-Russia pact, Karabakh and Nakhchivan as autonomous republics were recognized as Azerbaijan territories under article 3 of the treaty. Zangezur was recognized as Armenian territory. According to the article 14 of the pact, the Soviet government took commitment to foist the pact on the Caucasian republics. Under Joseph Stalin, the agreement was definitive and “Mountainous Karabakh” region was given to the Armenians.

With this, Karabakh crisis remained stagnant for several decades, until 1980 that a war started between Azerbaijan and Armenia. On June 12, 1988, Armenian parliament voted in favor of full split of Karabakh from Azerbaijan and its annexation to Armenia. Moscow and Baku severely reacted to the bill. The move led to start of war that continued beyond collapse of the Soviet Union in 1991. About 20 percent of Azerbaijan territory was held by Armenia. In 1994, OSCE Minsk Group brokered a ceasefire agreement to end a dispute that has so far taken 30,000 lives.

Azerbaijan announced independence from the Soviet Union on August 31, 1991. A month later, Armenia announced independence. The dispute remained in place and the situation remained combustible. The territorial dispute of the two newly-independent republics developed into an identity crisis as it was viewed through nationalist lenses with further cohesion. The war continued up to July 1994, until a ceasefire deal was signed.

The weekend clashes are coming as Turkey repeatedly backed Azerbaijan and even talked about direct intervention against Armenia. Reacting to the developments, President Recep Tayyip Erdogan of Turkey and other officials threatened to intervene, saying that they want Karabakh once and forever return to Azerbaijan.

But if Ankara takes steps in support of Baku, the situation will become complicated as Western countries will back Yerevan, making an agreement or one-side supremacy highly unattainable. With this in mind, the Karabakh crisis not only will not be settled by this conflict but also can go deeper and wider.

One of the important issues surrounding the crisis in Karabakh is the exploitation of the crisis by the two countries’ governments to cover up their internal crises and embark on populist policies. The social reality in the two countries shows that people of both countries show sensitivity to Karabakh and their sovereignty over it. Since the beginning, people more than governments wanted war for a showdown. For example, two months ago, Azerbaijan observed the largest rally by citizens calling for a campaign to “liberate” Karabakh from Armenia’s “occupation.”

The Unanswered Questions of 9/11

A look at the leader’s Hajj message 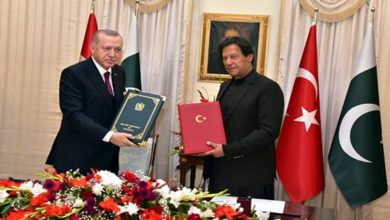 Shia Genocide and our reaction to it â€“ by Sabah Hasan