The last Friday of Ramazan vindicates the notion that Pakistan is natural ally of Iran because Pakistani nation observes International Quds Day with the Iranian spirit and enthusiasm.
However, a true Pakistani by his heart can argue that it is not Pakistanis who follow Iran but it is revolutionary Iran that has got its Palestine policy from Pakistan.

When nobody knew of Imam Khomeini, Jinnah and Iqbal created awareness regarding Palestine issue even prior to creation of Pakistan. They were leaders of All India Muslim League and that party led struggle for creation of Pakistan. That party issued many statements. They adopted resolutions against the Jewish State on Palestine much before declaration of establishment of Israel.

Most importantly, Pakistani nation has joined world nations, especially Muslims and Arabs by observing Quds Day with enthusiasm. Nation of Pakistan seems to be part of Iranian orbit today!!

Allama Iqbal died in 1938. Jinnah died in 1948. But they gave a Palestine policy to their Muslim League, the founding party of Pakistan. And since then, Pakistan never recognized Israel because founder of Pakistan Jinnah turned down it.

That is why whenever Pakistan government is seen lenient or flexible in favour of Israel, the entire Pakistani nation unanimously remind them ideology of Pakistan.

The stated policy of Pakistan has it Palestine belongs to Palestinians and its would-be capital al-Quds is sacred to the entire Islamic world.

This substantial narrative and active public support to Palestine cause bring Pakistanis closer to Iran.
Most importantly, Pakistan supports resistance groups in Kashmir whom she calls freedom fighters. Iran supports armed resistance of Palestinians. So, they have no difference over national resistance of the oppressed Muslims.

On the one hand, Pakistan and Iran come closer due to identical Palestine policy. And on the other, US-allied regimes of Arab League, GCC and OIC seek to soften the stance against Israel. They don’t match their actions with their words.

Their words? Even they forgot why OIC came into being? They forgot what is the single major conflict of the Muslim and Arab world? Muslims and particularly Arabs know well Palestine issue overshadows all other issues. That is why now they have to say it that some Arab regimes are not representing Arabs and Muslims in letter and spirit.

They say US is patron of Israel. Therefore, they detest the regimes or toeing US line against the interests of Arabs and Muslims.

From Arab streets to Pakistan’s streets, people reproach Israel and US for denying Palestinians their state and their inalienable rights. But, US-allied regimes seek to deflect their attention from said real issue through propagating illusionary Iranian threat.
International Quds Day today exposes these royals of GCC Sheikhdoms who have no agenda to liberate Palestine from the illegitimate occupation of Israel.

Reports had it they gather Arab and Muslim leaders to Makkah Summits to pave way for the fraud deal of the century to sell out Palestine.

But, Pakistani nation has joined world nations, especially Muslims and Arabs by observing Quds Day with enthusiasm. Nation of Pakistan seems to be part of Iranian orbit today!!

Or you may say Iran seems to be following Jinnah’s ideology against so-called Jewish State. In both cases, Pakistan and Iran can be seen in the orbit of each other as far as Palestine issue is concerned. 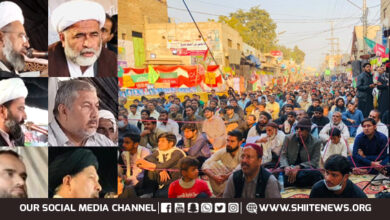