Shiite News: Hundreds of People gathered belonging to the Shia and Sunni communities at Islamabad Press Club, on Sunday, to protest against Malaoon Sultan Gul, a resident of Kurram District KP, who uttered rubbish against the beloved daughter of Imam Hussain (AS) named Hazrat Sakina (Slamullah Alaiha). They also marched up to the China Chowk to demand the immediate arrest of the accused.

On this occasion, speakers of the protest said that any imprudent remarks against the dignity of the Holy family of the Prophet PBUH were tantamount to blasphemy of Islam. The accused is currently abode in UAE, therefore he must be arrested through Interpol and punished accordingly to calm the resentment of the lovers of Ahle Bait (AS).

They added that a few takfiri culprits invite unrest to their beloved homeland. If anyone commits blasphemy for Ahle Bait (AS) express enmity for Islam and the State of the Islamic Republic of Pakistan. Such elements try to fuel sectarianism and any leniency with them will be enmity with the nation and the country. 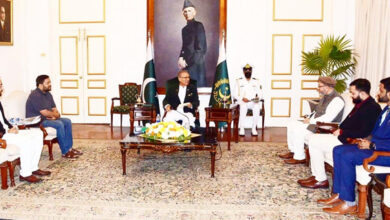