Russia has invited experts from the United Nations and the Red Cross to probe a deadly attack on a Ukrainian prison, with Kiev and Moscow trading blame over the incident.

This comes after a jail holding Ukrainian prisoners of war (POW) in Russian-controlled Donetsk town of Olenivka was bombarded on Friday. The strike reportedly killed dozens of prisoners who were captured after the fall of Mariupol in May.

Russian Defense Ministry said in a statement it was acting “in the interests of conducting an objective investigation” into what it called an attack on the jail and has invited the experts of UN and the Red Cross (ICRC) to probe the incident.

On Saturday, Ukrainian human rights official Dmytro Lubinets said on national television he had asked the International Committee of the Red Cross and the United Nations human rights monitoring mission to go to Olenivka.

Officials from Russia and the separatist authorities in Donetsk accused Kiev of hitting the prison with rockets, which left 53 dead and 75 wounded.

Ukraine’s armed forces denied responsibility, accusing the Russian forces of deliberately shelling the prison in order to accuse Ukraine of war crimes and also to cover up torture and executions of those held there.

“All political, legal and moral responsibility for this bloody massacre of Ukrainians lies with (Ukrainian President Volodymyr) Zelensky personally, his criminal regime and Washington, which backs them,” the Russian defense ministry said in a statement.

Zelensky laid the blame squarely on Russia. “This was a deliberate Russian war crime, a deliberate mass murder of Ukrainian prisoners of war,” he said.

President Zelensky on Saturday urged civilians to evacuate the Donetsk region, in what he called a “government decision.”

“There’s already a governmental decision about obligatory evacuation from Donetsk region,” he said in his daily address. “Please, follow evacuation.”

He warned that thousands of people, including children, were still in the combat zones in the larger Donbas region, which contains Donetsk as well as the neighboring Luhansk region.

“The more people leave (the) Donetsk region now, the fewer people the Russian army will have time to kill,” he claimed, adding that residents who left would be given compensation.

“Everything is being organized. Full support, full assistance — both logistical and payments. We only need a decision from the people themselves, who have not yet made it for themselves,” he said.

A mandatory evacuation notice posted on Saturday evening said the coming winter made it a matter of urgency, particularly for the more than 50,000 children still in the region.

Iryna Vereshchuk, Ukraine’s deputy prime minister, also said the evacuation needed to take place before winter begins since “there will be no heating in the Donetsk region in winter.”

Zelensky, in his address, also once more pressed the international community, especially the United States, to have Russia officially declared a “state sponsor of terrorism”.

In other developments, Ukrainian authorities said Russian strikes targeting the south and east of the country had left two people dead, one in southern Mykolaiv and another in eastern Bakhmut.

Also a strike on a bus stop in Mykolaiv, near the country’s southern frontline, killed five people and wounded seven more on Friday, the regional governor said. 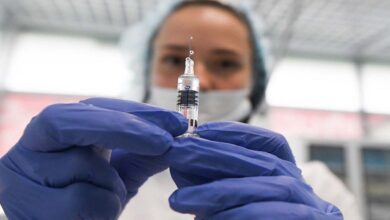 Russia aims to launch mass production of coronavirus vaccine by 2021