The Australian man who killed 51 Muslim worshipers at two mosques in New Zealand last year has opted not to speak at his sentencing.

Brenton Tarrant, 29, who sacked his lawyers and represented himself at the first session of a four-day hearing at the Christchurch High Court on Monday, has decided not to personally address the last sentencing hearing, court officials said on Wednesday.

However, a court-appointed lawyer would make a brief statement on his behalf on Thursday, before a final verdict is announced.

On March 15, 2019, Tarrant opened fire on Muslim worshipers attending prayers at two mosques in Christchurch. He live-streamed parts of the shooting rampage on Facebook.

Shortly before the terrorist attacks, Tarrant, an Australian national, had published an ideological “manifesto” filled with extreme views in which he described Muslim immigrants in Europe as “invaders.”

The white supremacist has pleaded guilty to 51 counts of murder, 40 of attempted murder, and one of terrorism.

During the last three sessions of the court, dozens of survivors and families of victims recounted the horrors of New Zealand’s worst mass shooting.

Aden Ibrahim Diriye, the father of slain three-year-old Mucaad Ibrahim, the youngest victim in the attacks, told the gunman that “true justice” awaited him in the next life, stressing that it would be more severe than prison.

“You have killed my son, and to me, it is as if you have killed the whole of New Zealand,” Diriye said in a statement read by a family member.

“Know that true justice is waiting for you in the next life and that will be far more severe. I will never forgive you for what you have done,” he said.

Ahad Nabi, who lost his 71-year-old father in the attack, demanded that Tarrant never be allowed to walk free.

“Allah allowed your small plan to go ahead for the people to see the bigger picture and to be aware of our evil surrounding,” Nabi said. “Your actions on that day displayed what a coward you are. You shot at defenseless people that were not aware of what was going on until they knew it was too late.”

“There’s nothing heroic about shooting people from behind and people not having a chance of defending themselves,” he added. “You will be remembered but as a scared killer, and nothing more.”

Sara Qasem, the daughter of victim Abdelfattah Qasem, said her father could have left but he stayed behind to help others. Qasem said she wished more than anything in the world she had been there to hold his father’s hand and tell him it would all be okay.

“You made a choice here — a conscious, stupid, irresponsible, cold-blooded, selfish, disgusting, heinous, evil choice,” Qasem said, looking at Tarrant, who was seated and surrounded by guards.

“I never would have ever imagined that the country my parents immigrated to for safety and for a successful future for their children would result in this,” she added. “I urge you to take a look around this court room and ask yourself who exactly is the other here right now? Is it us or is it you? I think the answer’s pretty clear.”

Tarrant is expected to face an unprecedented sentence of life in prison with no parole.

US must not sell arms to Saudi Arabia, Bahrain: Amnesty 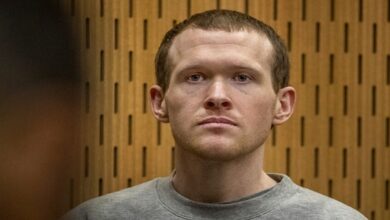