American officials admit that the US-led airstrikes are not stopping ISIL advances in Iraq and Syria, raising doubts on the efficacy of President Barack Obama’s long-contemplated strategy for confronting the terror organization.

Despite some of the most intense air raids so far, defense officials say that the embattled Kurdish town of Kobani in northern Syria could fall to ISIL militants.

The US has used bombers, fighter jets and drones to carry out at least 37 airstrikes in and around Kobani in recent days. ISIL militants, however, have managed to take control of a third of the strategically important town.

Pentagon officials also said this week that ISIL militants were gaining ground in Western Iraq, despite more than 345 US-led coalition airstrikes there since Aug. 8.

In the past week, ISIL terrorists captured the towns of Hit and Kubaisa in Anbar Province, forcing the Iraqi security forces to abandon their posts and weaponry.

“They keep moving. They get stronger. The president gave a speech a couple months ago of how serious the threat is and how we were going to degrade and destroy them. Well, we’re not,” the California Republican added.

As part of his strategy to “degrade and ultimately destroy” ISIL, Obama has authorized airstrikes in Iraq and Syria, but has repeatedly vowed not to send US ground forces into combat.

The administration hopes that “moderate” Syrian militants, being trained and equipped by the Pentagon, would lead the ground offensive against both ISIL and the Syrian government forces.

In recent days, US officials have said that the primary goal of the air campaign is not to save towns and cities, but rather to target the ISIL’s leadership, command and control, oil refineries, and other infrastructure.

Secretary of State John Kerry said Wednesday that preventing the fall of Kobani was not a “strategic objective” of the United States.

“Notwithstanding the crisis in Kobani, the original targets of our efforts have been the command and control centers, the infrastructure,” Kerry said.

Since late September, the US and several of its Arab allies — Saudi Arabia, Bahrain, Qatar, Jordan and the United Arab Emirates — have been conducting airstrikes against ISIL inside Syria without any authorization from Damascus or a UN mandate.

Some analysts maintain that the United States and its allies have seized on the ISIL threat to target the government of Syrian President Bashar al-Assad.

“I do suspect that it’s all an effort to eventually be bombing in Syria where they can switch the target to the Syrian government’s target,” American investigative journalist David Lindorff told Press TV last month.

Rodney Martin, American political commentator, also said in an interview that, “The United States has horrible track record in the region under its current policy, but it’s clear that the under entire mission of this ISIL strategy is to remove the Assad government.”

President Obama has indicated that “we are not going to stabilize” Syria under Assad. 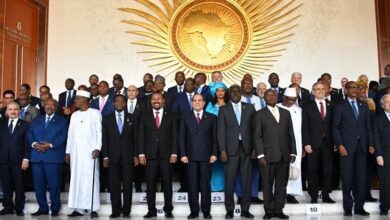 Obama backs down from Duterte showdown at ASEAN summit

Russia warns of ‘real threat’ of drone attacks by terrorists