Germany says it has rejected a proposal by the United States to set up a military coalition in the Persian Gulf to counter what it calls the “Iran threat” as tensions mount between Washington and Tehran.

“The US recently presented its concept of a naval observation mission in the Persian Gulf to a number of its allies, including Germany, and asked them to participate.

“The government took note of the proposal, but made no promises. Foreign Minister [Heiko] Maas has repeatedly stressed that, in our opinion, priority must be given to reducing tensions, and to diplomatic efforts. We are in close consultation with France and the UK. Participation in the US strategy of ‘maximum pressure’ is ruled out for us,” the German Foreign Ministry said in a statement received by Russia’s Sputnik news agency.

The statement came on the same day that German Finance Minister Olaf Scholz said his country was working closely with France and Britain amid tensions in the Persian Gulf.

“The goal of all responsible politicians must be to observe the situation very soberly and carefully, and not to sleepwalk into an even bigger crisis,” Scholz said in an interview with the Funke group of newspapers.

“De-escalation is the order of the day,” he pointed out.

Earlier on Tuesday, the United States stepped up diplomatic pressure on Germany, and officially asked the Western European country to join its maritime mission in the Persian Gulf against what it alleged as “Iranian aggression.”

“We’ve formally asked Germany to join France and the UK to help secure the Strait of Hormuz and combat Iranian aggression,” Tamara Sternberg-Greller, a spokeswoman for the US Embassy in Berlin (shown in the picture below), said in a statement.

She added, “Members of the German government have been clear that freedom of navigation should be protected… Our question is, protected by whom?”

Many German politicians have reportedly expressed grave reservations about any naval mission, and fear that any such move – particularly one orchestrated and led by the United States – could increase the risk of a military aggression on Iran.

US President Donald Trump regularly criticizes Germany for what he considers its insufficient contribution to the North Atlantic Treaty Organization (NATO).

US Marine General Joseph Dunford, chairman of the Joint Chiefs of Staff, said on July 9 that the US was proceeding with plans to assemble the coalition purportedly aimed at ensuring freedom of navigation in waters off Iran and Yemen.

“We’re engaging now with a number of countries to see if we can put together a coalition that would ensure freedom of navigation both in the Straits of Hormuz and the Bab al-Mandab,” Dunford said.

“And so I think probably over the next couple of weeks we’ll identify which nations have the political will to support that initiative and then we’ll work directly with the militaries to identify the specific capabilities that’ll support that,” he added.

Washington has lately adopted a quasi-warlike posture against Tehran, and intensified its provocative military moves in the Middle East, among them the June 20 incursion of advanced US-made RQ-4 Global Hawk into Iranian airspace over territorial waters off the coastal province of Hormozgan.

The UK has also joined the US in fueling tensions with Iran by seizing an Iranian-owned supertanker in the Strait of Gibraltar on July 4 in an apparent act of “maritime piracy.”

Two weeks later, a British-flagged tanker failed to stop after hitting an Iranian fishing boat — as is required by international law — in the Strait of Hormuz. Iran’s Islamic Revolution Guards Corps (IRGC) impounded the ship after its unsafe maneuver. 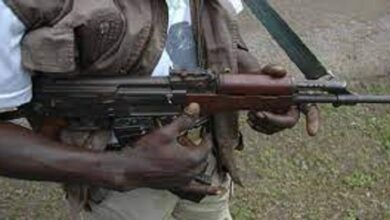 34 killed in attack on village in northwestern Nigeria