Saudi Shia leaders appealed to the Saudi King Abdullah bin Abdulaziz to imediately lift the ban imposed on the establishment of prayers in Shia mosques, which was banned by the Sauid Interior Minister and Local Sauidi Administration of al-Khobar City in mid of 2008. In a letter written to Saudi King Abdullah bin Abdul Aziz,They demanded of the King Abdullah to issue his orders and provide the justice to the Â Shiite community of Saudia Arabia. According to the Shiite News, Saudia Arabia Shia Muslims asked the Saudi King Abdullah to immediately release the detained Shiaâ€™s from the Saudi prisons, who were arrested by the biased Saudi Authorities for hosting the worship in their homes. They further urged the Saudi king to allow the Shiaâ€™s Muslim population of Saudia Arabia to setup their prayers in the Mosques and perform shia religious practicies in their places Its pertaining to mention here that biased Saudi administration were detained several Shia elders and notables on the charges for hosting worship and shia religious practices in their homes. Saudi authorities put surveillance on several â€œmosques possibleâ€ areas and have detained several Shia citizens for hosting Jamaâ€™a prayers in their houses. The appeal coincides with the expectation of the arrival of Saudi King Abdullah in the coming visit to the eastern region from Bahrain to conclude an official visit. It may be noted here that Â Prince Naif bin Abdulaziz, Saudi Interior Minister, refused to re-open the closed Shia mosques in Eastern Province for undisclosed security and sectarian issues. The Saudi Prince in his office on Saturday night informed the Shia delegation that re-opening the closed mosques is non negotiable. Saudi authorities shut down nine Shia mosques in the cities of Khobar, Dammam, Abqaiq and Ras Tanura and Al Khafji during the one year period. The Shias constitute around 15 percent of the population in Saudi Arabia, where Wahhabism, also known as Salafism, has been accused of fueling and funding terrorism against the Shia community. 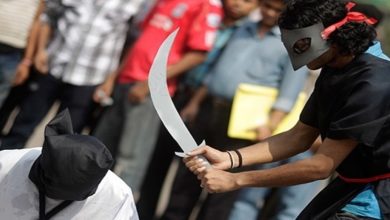