Saudi authorities arrested last week a Saudi Shia teacher in one of Hassa schools and sentenced him for three months detention and 60 flogs. The teacher was accused of reading supplemental Shia prayers at Baqi’a cemetery in Madinah. Sources informed Rasid that forces from the Intelligence Administration in Al-Hassa arrested Mohammad Jasim Al-Hofoufi (44 years) from his workplace in Al-Mubbaraz city. The teacher was handcuffed and arrested before his students and mates. He was accused by Saudi Religious Police of reading a polytheistic Shia supplements at Al_baqi’a cemetery in the holy city Al-Madinah. Sources informed Rasid that the initial sentence by Al-Hassa Court judge was imprisonment for ten days and 60 flogs. But when the accused tried to defend himself, the judge changed the sentence to 3 months for court contempt. Mr. Al-Hofoufi is a father to six and was sent to prison immediately.

It should be noted here that Mr. Al-Hofoufi was accused several months back of insulting prominent historical figures (Sahaba) and as a result, he was demoted to an administration work. But his perseverance in Saudi Supreme Court proved him innocent and his status as a teacher regained. Sources informed Rasid that this accusation is probably a scheme by the Religious Police. 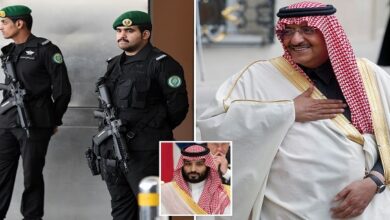 Bin Salman Transfers Two Princes to Prison in Desert, In Preparation for their Execution

Saudis to execute US plan on Palestinian refugees