Sindh government education department’s biased mindset has been exposed by their deliberate attempt to differentiate demises of two high-profile figures of Muslim history calling one as martyrdom and other as death. This biased differentiation can be read in the Class IV book Muasharati Uloom (Social Studies) published by Sindh Textbook Board.

The page 117 of aforesaid book for class IV Urdu medium primary students begins with the mention of Hazrat Usman, third Muslim ruler or caliph. The book says he martyred by enemies. However, the last line of the page 117 says Hazrat Ali died despite the fact that he embraced martyrdom due to a terrorist attack.
Shia Muslims have unwavering belief in the infallible leadership of Hazrat Ali whom they call Maula Ali and infallible Imam. Sunni Muslims too revere Maula Ali but it seems that Sindh education department textbook was authored by biased people who want to mislead students by calling one death as a result of attack as martyrdom and the other one simply as death.
This biased line has mortified the religious sentiments of a vast majority of Muslims and they demand correction of the wording and action against biased officials and authors. 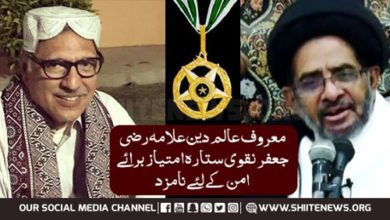 Pakistan should be presented to the world as an Islamic state according to the wishes of Quaid: Allama Raja Nasir Abbas Jafri