The Senate’s Committee on Interior demanded hanging of Ehsanullah Ehsan to death arguing that a cruel person like Deobandi Taliban terrorist Ehsanullah Ehsan deserved no mercy who had proudly claimed responsibility for killing thousands of innocent Pakistani civilians and troops.

The Senate committee also condemned the unprovoked firing by Afghan forces across the Pak-Afghan border in which innocent people were killed and many injured while demanding of the Government of Pakistan to take up the issue of firing by Afghan forces with UNO and directed the Ministry of Interior to brief the committee about firing at the Pak-Afghan border by Afghan forces and also brief the committee about Border Control Management as to what steps the government had taken to stop such kind of brutalities in future.
The meeting of the Senate’s Standing Committee on Interior and Narcotics Control was held with its Chairman Senator A Rehman Malik in the chair here on Monday. Talking on the issue of Ehsanullah Ehsan, Rehman Malik said that the credit went to the Pakistan Army and its Operation Radul Fasaad that forced the worst terrorist like Ehsan to surrender.
He said that a cruel person like Ehsan deserved no mercy as he had proudly claimed responsibility for killing of thousands of innocent Pakistani civilians and troops. He said that he was astonished that worst and brutal killer Ehsanullah Ehsan had no shame and remorse for his heinous crimes.
Senator Rehman Malik stated there was no relaxation and provision in the Constitution and law for such killers. He further directed that the committee should be briefed about him in the next meeting.
In the opening remarks, Senator A Rehman Malik condemned the unprovoked firing by Afghan forces across the Pak-Afghan border in which innocent people were killed and many injured.
Senator A Rehman Malik said that this committee expressed grave concerns and anger over the act of violation by the Afghan government and warned the government of Afghanistan to stop playing in the hands of Indian Prime Minister Modi. He said that a superpower is present in Afghanistan so such unprovoked firing could not be ignored as he saw a conspiracy behind the ongoing violations across the border by Afghan security forces.
He hoped that the government of Pakistan had not taken the Afghan forces’ firing across the Pak-Afghan border lightly and would take up the issue with the United Nations. He said that the Pakistan government should have asked for a written apology from Afghanistan for the Pak-Afghan border violation. Senator Rehman Malik said that this committee demanded the government to take up the issue of firing by the Afghan forces with the UNO.
The committee also discussed the Illegal Dispossession (Amendment) Bill, 2017, and members of the committee were of the view that the property of the people has been grabbed and no one is there to investigate as the real owners of the property have to suffer a lot due to lack of law.
Senator Rehman Malik said that he has been receiving a lot of complaints from overseas Pakistanis that their properties are being grabbed in their absence. Senator Shahi Syed said that the police didn’t take any action against land grabbers and it had turned into the worst mafia of the country.
Chairman Senate Standing Committee on Interior Senator A Rehman Malik expressed pleasures and satisfaction on the safe recovery of PPP’s missing workers and appreciated the law enforcement agencies; however, he directed the Ministry of Interior to share the details of the both abductees with the committee.
The Nadra chairman briefed the committee in detail about the blocking and unblocking of the National Identity Cards across the country. While praising Nadra’s move of unblocking of CNIC of genuine Pakistanis, Senator A Rehman Malik said that Pakistan is passing through difficult time of its history so Nadra must ensure it that no Afghan and other foreigner possessed the National Identity Card of Pakistan.
The situation turned serious when Senator A Rehman Malik disclosed before the committee that he is continuously receiving death threats through calls and messages. He said he is being threatened to either refrain from statements against Taliban/Daesh and remain silent over the issue of fake CNIC to Afghan nationals or get ready for the consequences. He added that he is being threatened of attack and character assassination to harm, defame and humiliate him.
He said that he wants to tell the enemies of Pakistan and humanity that he is afraid of none but Allah, and he will continue to speak against terrorists and anti-Pakistan elements till the last breath of his life. He stressed that stringent actions must be taken against those Nadra and other government departments officials who were found involved or abetment in issuance of CNICs to Afghan nationals.
The chairman assured the committee that strict actions will be taken against those who were found involved in this heinous crime. The meeting was attended by Senator Shahi Syed, Senator Col (retd) Syed Tahir Hussian Mashhadi, Senator Muhammad Javed Abassi, Senator Dr Jehanzeb Jamaldini, Senator Chaudhary Tanvir Khan, Senator Muhammad Ali Khan Saif, Mukhtiar Ahmed Dhamrah and Shibli Faraz. 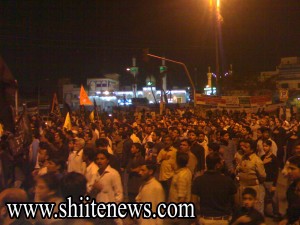