In the Name of Allah, the Compassionate, the Merciful

Who is a greater wrongdoer than him who denies access to the mosques of Allah lest His Name be celebrated therein, and tries to ruin them? Such ones may not enter them, except in fear.

There is disgrace for them in this world, and there is for them a great punishment in the Hereafter.Â  (Baqarah 2:114)

Unfortunately, pressures and difficulties against the followers of the Ahl al-Bayt (â€˜a) have recently intensified in Saudi Arabia.

Some extremist lobbies dominating Saudi state institutions have been causing trouble for the Shiâ€˜ah such as unfounded arrests, police investigations, short and long term prison sentences, ban of religious ceremonies, and infringement of citizenship rights.

The worst of these measures is the prohibition of the simplest religious right of a Muslim, i.e. public prayer, which has reached a peak.Â  In addition to closing the Shiâ€˜ah mosques of al-Khabar, they are denied the right to perform congregational prayer even behind Sunni Imams at Sunni mosques.

As an international nongovernmental organization, the Ahl al-Bayt (â€˜a) World Assembly requests the attention of global human rights organizations regarding the suffering of the oppressed people living in the eastern region of Saudi Arabia.Â  We also petition the Saudi government to not submit to these extremists and to put an end to these problems.

Statesmen of this country very well know that the followers of the school of the Ahl al-Bayt (â€˜a), comprising of millions of Saudi citizens, form a great part of the inhabitants of the Arabian Peninsula.Â  Therefore, exerting pressure upon them may lead to break up of the relationship between these oppressed people and the governmental structure of this country.

Consequently, concerned parties in this country are expected to thoughtfully prevent such occurrences in the future. 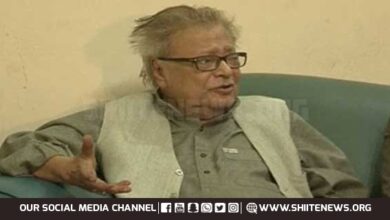 Why no action is taken upon links of Muslim League (N)’s Ministers with terrorists: Sahibzada Hamid Raza