Majlis-e-Wahdate Muslimeen (MWM) on Friday alleged that the United States and Israel are involved in the ongoing sectarian killings of Shia Muslims in Pakistan. This was said by the speakers during the protest demonstration held outside the Noor-e-Eman Mosque in Karachi to denounce the killing of Shia Muslims in Quetta, Karachi, Kohat and Kurram Agency. According to the Shiite News, The participants of the protest demonstration were chanting the anti-United States and Israel slogans and also denounced the Taliban terrorists. Addressing the demonstration, MWM Central Leader Maulana Munawar Naqvi said that through killing the Shia community in the country, America and Israel wants to destabilize Pakistan. He expressed his concern over the silence of Government and Law Enforcement agencies on the killing of Shia community people in Quetta, Karachi, Kurram Agency and other areas. He demanded of the Chief Justice of Pakistan Iftikhar Mohammad Chaudhry to take immediate notice of the killing of Shia people in Pakistan and activities of banned religious outfits in Sindh province. MWM Leader appealed to the President Zardari, Prime Minister Gilani and Army Chief to extend the Army operation against the terrorists on Balochistan and Kurram agency to eliminate the terrorists from these areas, who wants to destabilize the country through their heinous terrorist activities. He asked the government to forthwith grant the compensation amount to the victims and injured of Ashura and Arbaeen bomb blast incidents in Karachi saying that the families of Ashura and Arbaeen martyrs are still deprived from the compensation amount announced by the government. However, countrywide demonstrations were organized by Majlis-e-Wahdate Muslimeen (MWM) in Islamabad, Lahore, Multan, Faisalabad, Gilgit, Baltistan, Quetta, Hyderabad, Sukkur, Jhang, NMawabshah, MirpurKhas, Larkana, Jaffarabad, Azad Kashmir and others areas of the country to denounce the genocide of Shia Muslims in Pakistan including Quetta, Kurram Agency, Kohat and Karachi. 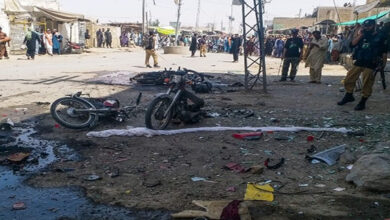 Chaman blast death toll rises to five while 20 others injured