Leaders of All Pakistan Shia Action Committee (APSAC) gave the 48 hours deadline to the Government and other state institutions to end the illegal abduction of the Shiite Men of Karachi and detained the real terrorists involved in the genocide of Shiite Muslims. They warned that otherwise, a nationwide protest movement will be initiated and spread in all length and breadth throws out the country.

Addressing the press conference here at Karachi press club following the protest demonstration of the families of the illegally abducted Shiite men, Maulana Mirza Yousuf Hussain, Ali Osat Rizvi and Shoail Mirza of All Pakistan Shia Action Committee have informed media that since a month past, a continuous lawless serial included harassment by various state agencies, police, rangers, intelligence institutions against Shiite Muslim here through stateâ€™s creation of fear and dread, making arrests, exercising torture and falling intro trap of false cases especially against Shiite youth who are kidnapped and taken away in governmental vehicles and by uniformed personnel and kept under illegal detention at unknown and undisclosed destinations.
These practices have spread severe restlessness and anxiety with uncertainty on fate of missing persons within their families and their oppressed and helpless community without required recourse to law or removal of their grievances.
These unsurprising expressions were advised by Shia Action Committee yesterday with a compassionate appeal to fulfill media duties and responsibilities for information worldwide. APSAC mentioned some instances of afore mentioned illegal actions by law enforcing agencies and institutions. All Pakistan Shia Action Committee elaborated in citing its explanations:
1. From Rizvia police station, Jafaria Gulbahar, state agents forcibly entered into the houses and whisked away four persons Raees Ahmad and his son Mohammad Hussain alias Hussaini, Azhar Abbas and Naeem Haidar. No one knew their whereabouts for several days. Later, they were unnecessarily involved into old cases registered under various police stations. These are cases in which accused persons are unknown. Names of arrested Shiite youngsters were falsely entered as culprits in more than 30 fake cases. These abducted persons were subjected under most inhuman of physical tortures, something we personally witnessed during our personal visits, observations and meetings with those persons at Liaqatabad police stations.
2. A resident of Abbas Town named Zakir left his home for offering compulsory Friday Namaaz prayers but on return from mosque, state institutionsâ€™ agents kidnapped him in the middle of the way and took him away to an unknown destination. He is still missing and his whereabouts remain unknown.
3. Samar Abbas Jafari, resident of Gulbaharâ€™s area Jafaria, was engaged in his work duty in Haidari Market when uniformed state forces forcibly took him away. Police has refused to inform of anything about him and have threatened his family.
4. On 22 March, police and agents of intelligence agencies broke the locks, disrespected the sanctity of sacred family and social values, broke the locks of doors of the houses and barged inside in Awami Colony, Korangi. They took away two innocent youngsters Kazim Abbas and Sajjad Ali with themselves. While leaving, they also snatched away 5 mobile phones and torch light. Most of such prejudiced acts are frequently carried by area SHO Javed Ahmad Borouhi. Therefore, we demand that SHO Javed Ahmad Borouhi be dismissed, and Kazim Abbas and Sajjad Ali be recovered.
5. Najaf Ali who was residing in New Rizvia and was returning from office and talking to his family on phone, was taken away by security personnel from near Hassan Square a week ago. Up to now, police and other offices are not giving any information about him, his case and his whereabouts.
6. In Shah Faisal Colony a youngster Agha Farrukh went along with his brother to register a report in area police station about theft of his brotherâ€™s motorcycle snatched at gunpoint. Thereupon, its SHO held him in that police station by saying â€œan FIR complaint lodged with a charge that you are a murderer! You cannot leave this police station!! He was thus dragged into a murder case!!! Upon inquiry, it was detailed that about 15 months ago, a murder had occurred. Authorities of Jamea Farooqia had registered an FIR against 27 persons, but Agha Farrukhâ€™s name was reportedly not includ ed in it. Agha Farrukh is resident in a house just opposite Jamea Farooqia since long years. He was never called by police, nor was there any raid for arrest on his house. An attempt is now made to drag him into an over one year old case,
Shia Action Committee thereafter declared: Afore mentioned activities by police and other agents indicate that at a time of start of caretaker interim government in the wake of upcoming elections Muslim Shiite minority is being used to pressurize them for evil purposes and is being pushed to the wall. We think that these kind of anti-Shiite bias and acts will make holding of peaceful elections rather difficult. It is feared that Shiite community, daily taking up its martyrs, will become extremely frustrated and run out of patience, will don a shroud and fight it out till death. Therefore, it is appealed for the umpteenth time that police and security offices must refrain from falling into trap of false conspiracies and false accusations weaved by enemies of Shiite minority.
Shia Action Committee demanded that afore mentioned and other innocent Shiite persons be immediately free and a law defying series of law enforcersâ€™ raids not properly investigated so that false charges can be made known beforehand, be stopped forthwith on Shiite houses and mostly Shiite populated areas. In this connection, we are giving a deadline of 48 hours to governmental institutions to comply with and make law enforced duty bound to fulfill legal requirements, catch real criminals and free innocent persons they habitually arrest conveniently. Otherwise, a nationwide protest movement will be initiated and spread in all length and breadth throughout Pakistan, Shia Action Committee said. 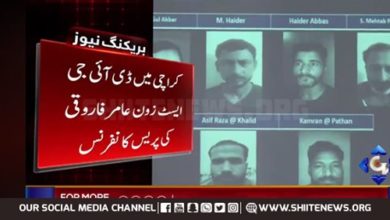